She did it on a dare.

Last year the mezzo-soprano Daniela Mack was in Washington, D. C., to sing the role of Bradamante in Handel’s opera Alcina. The conductor Jane Glover asked her if she thought she could sing a fearsomely long 72-note phrase in one of the arias on one breath.

So Mack went away to a practice room one morning, chugged some coffee, and sailed right through it in front of a mic and video camera. She said there wasn’t much chance she could do it onstage in costume and moving around, but she would work on it.

And she did. While in Boston rehearsing for the Boston Lyric Opera’s production of Rossini’s Il Barbiere di Siviglia (The Barber of Seville), Mack says that she was able to sing that phrase in one breath a few times onstage, in about half the Washington performances, which she rightly considers a challenge met. “I had no idea that little video would make the impression that it did,” she said.

Mack posted the practice-room video on her website, and in it she is captivatingly direct, informal, modest yet sure of herself, even though she held her first morning cup of coffee in her hand. In a dimly-lit upstairs corridor in the Boston Center for the Arts during rehearsals, she again looked effortlessly glamorous, even in frayed-at-the-knee rehearsal clothes. She’s quick-witted and her eyes dance. And recordings of her singing reveal a wide-ranging, ripe-plum voice and a secure coloratura technique that knows no fear.

At the time of the interview, she was preparing to perform the role she has sung most often in her career so far, the lively Rosina, a bird in a gilded cage she is determined to fly away from. This will be Mack’s sixth run in this opera, and the seventh follows next month in Detroit. She considers her performances of Rosina with Opera Cleveland in 2009 as her full-scale professional debut; the tenor who serenaded and courted her was her husband, Alek Shrader. She has since sung the opera in such prestigious venues as the Royal Opera, Covent Garden, in London and with the San Francisco Opera.

“Rosina is an old friend, but she never gets boring,” Mack says. “To sing the same part all the time would get boring if nothing ever changed, but each new production, each new director, each new concept makes everything different.” She says she has no interest in plugging a perfected all-purpose Rosina into every new production. “I even keep changing the ornamentation I use as my voice grows and changes. As I have gained strength in my instrument, I really like to dig into my lower register—I really relish gravelly chest notes!”

Mack was born in Argentina; her mother is Argentinian and her adoptive father is an American. She left Argentina for the United States when she was 6, but she still has family in Buenos Aires. “Music came into my life because of my grandmother who was a piano teacher, and I began to mess around on her piano when I was very young. I was very intent on the piano through grade school and high school. In Houston, when I was 15, I began playing around with my voice with my piano teacher at the end of lessons. At that point I was singing show tunes and Latin ballads and I was interested in musical theater. I saw all the Rodgers and Hammerstein movies because my father loved them—so I loved them too. I still didn’t have any idea about becoming a professional musician, or about how to become one.” 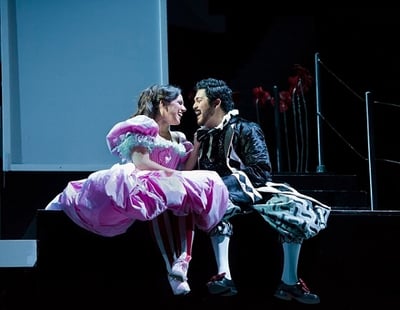 Ultimately Mack did her undergraduate work at Louisiana State University. She says “there is no one path” towards a career in opera these days. “You sort of make it up as you go along. I did a season in Sarasota, covered a role at Virginia Opera, went through young artists’ programs at Chautauqua and in Des Moines, and the Adler Program at San Francisco. Each of these experiences opened up the door to the next.”

The Adler Program also introduced her to her husband, with whom she has often sung. Without abandoning his own busy career, he has joined the faculty of the opera program at Notre Dame University in Indiana as one direct result of the birth of their daughter, Eva, three years ago. “Our itinerant opera singer careers lasted 10 years, and for a while we took Eva with us everywhere, but we needed a home base. After having a child, I talked to many other singing moms about what I needed to do. My voice continued to fill out a lot more and I had to stop for awhile to learn how to use the support systems from scratch all over again—the situation made it necessary and useful to do more technical work, and that has made possible to take on a role like Carmen, which would have been a stretch for me before.”

The upward trajectory of Mack’s career continued when she entered the Cardiff Singer of the World competition where she became a finalist the year that Jamie Barton won. At the finals concert, Mack sang the rondo-finale from Rossini’s Cenerentola, a spectacular coloratura performance that brought her to the attention of international opera company managers and symphonic conductors. She has subsequently sung at the English National Opera and appeared with orchestras in Leipzig and Sydney—in Australia she sang a group of Canteloube’s Songs of the Auvergne and Falla’s Seven Popular Spanish Songs in an unusual orchestration by Luciano Berio. On a transcription of that  broadcast, she sounds luscious, but says, “I was seven months pregnant at the time. That wasn’t announced over the radio, but if you were looking, it was impossible to miss!”

She also made her debut with the Boston Symphony Orchestra in 2016, where she sang in three performances of Ravel’s opera L’Heure Espagnole. Baroque music represents another major strand in her career. In London, Mack found herself in a highly controversial production of Handel’s Guilio Cesare. “Audience members said they had to close their eyes because of some of the cruelty—a giraffe’s tongue was cut out. The production was what it was, but I can’t go into anything halfway, so I dug deep. I didn’t end up hating it because I always have to develop an affinity for what I’m doing.” She has also ventured into contemporary music, appearing in two world premieres. She sang the title role of Elizabeth Cree in Kevin Puts’ opera (Philadelphia) and Jacqueline Kennedy in David T. Little’s JFK (Fort Worth and Montreal). “I love working on new operas because nobody has expectations based on other performances and singers or what people have seen on YouTube. It is an opportunity to put my own stamp on something, and it keeps me honest as a performer.”

Rossini remains the core of her repertory—she has sung the virtuoso cantata Giovanna d’Arco and the principal mezzo roles in Cenerentola and in L’Italiana in Algeri in addition to Rosina, and she wants to do more of his operas, especially La Donna del Lago and Otello. “I would dearly love it if someone were to ask me to sing Desdemona.”

Meanwhile she is happy to be singing Rosina again and to be working with director Rosetta Cucchi here at BLO. “She and the set designer, Julia Noulin-Mérat, have created the look of the production from the drawings of M. C. Escher. There are no walls and many staircases, most of which go nowhere. Rosetta is interested in visualizing how trapped Rosina feels … So for most of the first act she is confined to a little platform, maybe seven feet by seven feet. This becomes a real acting exercise for me—I am used to ranging all over the stage. Rosina knows she wants to get out and she’s alert to every opportunity—she knows how to interact with Figaro, she knows how to read the room and she has conveniently developed a feeling for another man who has his own ideas for getting her out. She’s got quite a personality. And I want to keep singing Rosina for as long as I can . . .”

Images (top to bottom): Daniela Mack in a promotional photo shoot before Barber; Mack onstage as Rosina alongside Jesus Garcia as Almaviva. Both images by Liza Voll Photography.