A Deep Dive into Poul Ruders' THE HANDMAID'S TALE: Part I

Musicologist and writer Laura Stanfield Prichard takes a deep dive into The Handmaid's Tale by Poul Ruders in this two-part series! 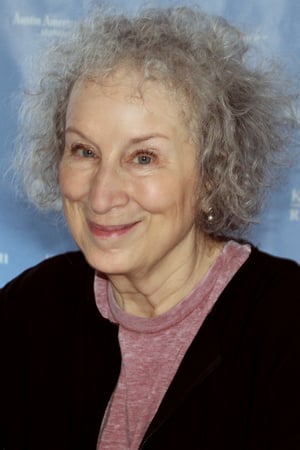 Groundbreaking Canadian author Margaret Atwood was born in Ottawa in 1939, just 18 months before Britten began working on Grimes. She writes, “Having come to consciousness during World War II, I knew that established orders could vanish overnight. It can’t happen here could not be depended on: anything could happen anywhere, given the circumstances.” Her controversial, speculative novel The Handmaid’s Tale was begun in 1984, while she was living in wall-encircled West Berlin. She heard daily sonic booms from the East German air force, sensed “the feeling of being spied on,” and was haunted by the many repurposed buildings (“This used to belong to... but then they disappeared.”).

Atwood set her timely cautionary tale in Gilead, a near-future theocratic republic founded on 17th-century Puritan principles. Most of the action takes place around what once was Harvard University, with the Gilead Secret Service based in the Widener Library, where Atwood had researched her own New England ancestors. The novel’s first chapter opens in “what once had been the gymnasium,” so BLO’s choice of performance venue, Lavietes Pavilion, Harvard’s refurbished basketball arena (formerly the historic Briggs Cage), will plunge audiences into the heart of Atwood’s chilling world. Her narrator begins, “The floor was of varnished wood, with stripes and circles painted on it, for the games that were formerly played there; the hoops for the basketball nets were still in place, though the nets were gone...”

BLO’s Handmaid’s Tale will be helmed by the Obie, Bessie, and American Theater Wing award-winning director Anne Bogart, with 12 of the 17 leading roles sung by women. Stanford Calderwood General & Artistic Director Esther Nelson comments, “Together the music and this tale—set in an unconventional space and directed by a woman at the top of her skills—promises one of the grandest productions we have presented.” 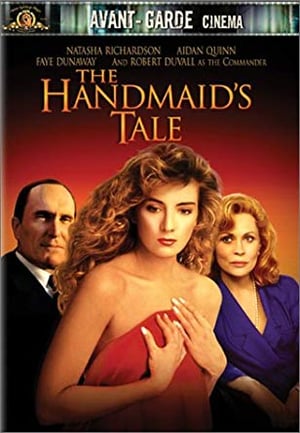 Atwood’s critically-acclaimed novel was published in 1985 and immediately adapted into a screenplay by Harold Pinter. Sigourney Weaver was tapped for the title role but had to drop out when she became pregnant; many studio executives turned down the script due to its being “a film for and about women.” German director Volker Schlöndorff took over, casting Natasha Richardson as the lead and modifying Pinter’s work (1990). The novel has been adapted for radio and the stage, with the three most recent successes being Lili York’s 2013 story ballet for the Royal Winnipeg Ballet, Hulu’s Emmy-winning streaming television series (2016–present, with a cameo by the author), and a stunning contemporary operatic treatment by Poul Ruders (b. 1949), composed between 1996–1998 and premiered in 2000 by the Royal Danish Opera. Ruders’ haunting, vivid opera won the 2001 Cannes Classical Award, was nominated for two Grammys, and will be presented in a new edition commissioned by BLO this May.

English librettist, writer, and actor Paul Bentley (b. 1942) chose to quote frequently from Atwood’s text when crafting the text for Ruders’ opera: he retained many whole conversations, while ceremonial chanted texts recur and evolve into more elaborate Latin hymns. Bentley made the innovative choice to create an additional mezzo-soprano role (the Double) to voice the title character’s memories of her former self, while retaining all of Atwood’s major characters. The novel’s 46 chapters (some as short as two pages) became a sinuous series of 38 scenes, in a Prelude followed by two Acts.

The Handmaid’s Tale mines horror and comic irony from the fact that its primary villains, even in a state-mandated patriarchy, are female. The mother of the title character had been an active proponent of women’s rights: after choosing slavery over certain death, her daughter reflects, “You wanted a women’s culture. Well, now there is one. It isn’t what you meant, but it exists.”

THE STORY WITH MUSICAL NOTES 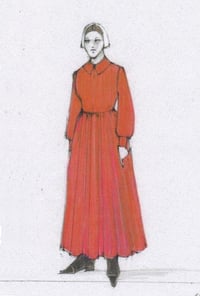 In the Republic of Gilead, two years from now, women are forbidden to read or write, to hold jobs, and to own property. They wear colored habits to signify their enforced roles as upper class Wives (wearing light blue for purity), lower class Econowives (in stripes), Marthas (housekeepers), Jezebels (sex workers), Aunts (authoritarian chaperones, in khaki), and Handmaids (sexual surrogates, in red). Atwood has clarified that the face-hiding bonnets worn by the Handmaids came not from nuns, but from an advertisement for Old Dutch Cleanser that scared her as a child.

The narrator, sung by Metropolitan Opera favorite and recurring BLO star Jennifer Johnson Cano (Carmen and Don Giovanni) is an American woman in her early thirties, a survivor of recent natural disasters and war. We experience the opera as a vivid re-telling of her turbulent past. Once present, she almost never leaves the stage: this 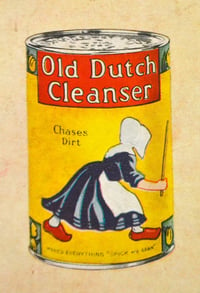 demands a singer with stamina, range, and intensity. Writing about the demands of Ruders’ music, critic Stephen Johnson noted, “He can be gloriously, explosively extrovert one minute—withdrawn, haunted, intently inward-looking the next. Super-abundant high spirits alternate with pained, almost expressionistic lyricism; simplicity and directness with astringent irony.”

Dramatic soprano Caroline Worra (BLO’s Greek, Agrippina, Lizzie Borden) returns as Aunt Lydia, a terrifying Scarpia-like enforcer for the new regime. She dominates the Prelude, leading a chorus of women in a dystopian reworking of the Beatitudes (“Thou shalt not...”) over a slowly moving series of haunting, empty chords and chromatic swirls. We meet the narrator’s determined best friend Moira (soprano) and the unbalanced Janine, later known as Ofwarren (soprano). Assigned to enforced servitude as a Handmaid for her past “sins” (an affair with Luke, a married man), the main character never tells us her name: she has been re-named Offred, a patronymic indicating that she has become a ceremonial mate for a government commander named Fred (sung by bass-baritone David Cushing). Atwood clarifies, “Within this name is concealed another possibility: ‘offered,’ denoting a religious offering or a victim offered in sacrifice.”

The Commander’s wife Serena Joy (Metropolitan Opera mezzo-soprano Maria Zifchak) is a former Sunday morning television gospel singer. The household also includes a Martha named Rita (alto) and the Commander’s servant, Nick (tenor). Offred befriends another Handmaid named Ofglen (soprano Michelle Trainor) and discovers a message in her wardrobe left by an earlier Handmaid. She has a monthly check-up with a doctor (portrayed by tenor Matthew DiBattista), who offers to impregnate her, and she laments that she is not pregnant in the haunting aria “Ev’ry moon I watch for blood.” Ruders describes this as “a dangerous state of affairs” as she is “in her third ‘posting’ and if she does not succeed in having a child, she will be deported to one of the abandoned nuclear power plants to clean up waste.” Shortly after, we witness the required monthly Ceremony of forced/attempted conception.

Whereas Atwood silenced Serena Joy’s singing voice, relegating it only to Offred’s memory, Ruders develops that character through songs mentioned in Atwood’s novel. Hymns such as “Amazing Grace” are used to devastating effect in difficult moments as well as to evoke nostalgia. When Offred and Ofglen are summoned to the Red Center, Ruders builds a complex scene inspired by Mozart’s finales, layering voices until five soloists and three choirs compete for dominance over the orchestra. Ofwarren gives birth, and the orchestra suddenly reverts to an eerie C/C#major drone, followed by a celebratory fanfare of harsh parallel triads. 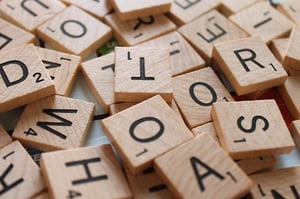 Act I concludes with the tensest scene from the novel, in which the Commander invites Offred to play a simple game of Scrabble. Ruders builds up our expectations as operagoers, but this is neither the boisterous gambling from Puccini’s Golden Girl of the West nor the corrupt faro table of Tchaikovsky’s Queen of Spades. In Gilead, reading is forbidden to women: dangerous, indecent. Ruders permeates the scene with sustained lines of tension, weaving together our fears for Offred’s safety and our recognition of her first steps toward freedom.

Act II is also peppered with Offred’s memories of the “time before”—her husband, her daughter, their violent separation after trying to escape to Canada. Offred struggles not to forget her past: as she continues to meet with the Commander (he gives her contraband magazines to read), she reinterprets her changing status from empty vessel to mistress to potential member of the resistance. Ofglen hopes she will spy on the Commander, Serena Joy hopes she will sleep with Nick in order to get pregnant, and the Commander hopes she will become his regular companion for outings to Jezebel’s, a private club where she discovers her old friend, Moira.

The dramatic climax of Act II takes place inside the Wall, at the Salvaging Center, where Aunt Lydia whips the crowd into a frenzy and the Handmaids punish an accused man, accompanied by the eerie harmonized humming of the Guards echoed by orchestral strings. When Offred looks for Ofglen afterwards, a new Ofglen has taken her place. Back at home, Serena Joy and Rita confront Offred and the Commander with their indiscretions in a contrapuntal quartet reminiscent of Alban Berg’s Lulu, building to the scream of a police siren. Nick bursts in, and Offred is swept away to an unknown fate.