Beyond the Stage: An Intern’s Perspective on Community Engagement at Boston Lyric Opera 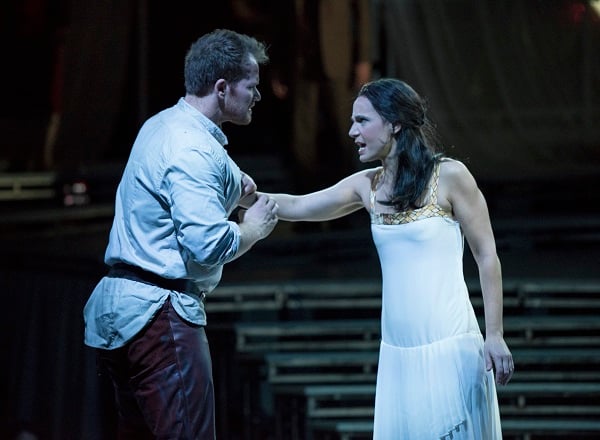 I began writing this blog post a couple of weeks prior to the opening of Benjamin Britten’s The Rape of Lucretia in March, Boston Lyric Opera’s third production of the Season. Since then, Emerson College, where I attend graduate school, has come under fire after several unidentified students posted a list of names of students who violated the sexual misconduct policy. As I’m writing this today, the New York Times published an article about Swarthmore College fraternity members historically and presently committing acts of sexual violence that have been repeatedly ignored by the administration.

Since September, I’ve had the opportunity to intern at Boston Lyric Opera in the Community Engagement and Education Department, finishing my time at BLO alongside the final production of BLO’s Season, an operatic adaptation of Margaret Atwood’s The Handmaid’s Tale, composed by Poul Ruders. The #MeToo movement (for lack of better blanket terminology) has continued to gain momentum since the beginning of my post at BLO, with nationwide calls to engage with the prevalence of both high-profile and local instances of sexual violence. These calls have been made not only from activists, politicians, and survivors, but also by artistic organizations opting to engage in citizenship through their respective artistic mediums and institutional resources. 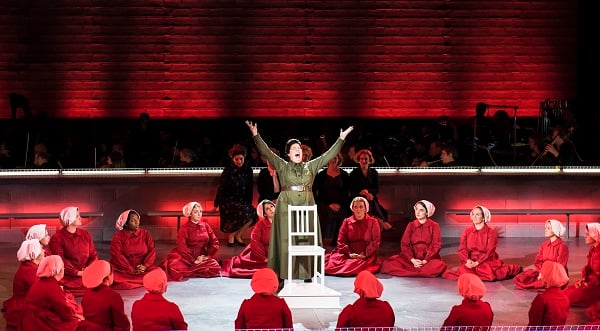 Opera has a particularly difficult way into community engagement. As a recent OPERA America article discussed, opera companies across the United States are combating the significant volume of narratives of the operatic canon that focus on the oppression of women. Many are choosing to adjust narratives from the traditional canon to return agency to the women depicted in shows such as Heartbeat Opera’s Carmen, or as Sarna Lapine did for BLO’s production of Rape of Lucretia, focusing on the resilience of the women rather than the tragedy. Or, as BLO is doing with The Handmaid’s Tale, some are choosing to present new narratives that were written with the express purpose of telling stories from female perspectives and stories of female survival.

President of LA Opera, Christopher Koelsch  notes in the article “There’s a strong public perception that opera companies live in a hermetically sealed world. This gives us an opportunity to countermand that by asking the question: ‘How, collectively, as a community, can we sort ourselves out?’” Perhaps this “sorting out” begins on the stage, with the decision to do one production or another, or the decision to attach this director or another to it, but it goes far beyond that. In the case of Boston Lyric Opera, we are certainly not living in a hermetically sealed world. Emerson and Swarthmore are only two examples of the blowback many colleges across the United States have received regarding their treatment of sexual violence survivors. Boston is home to one of the largest college student populations in the country, houses numerous high schools in the metro area and beyond, and certainly echoes national issues on a local level, as any other city does. I feel deeply that we have a responsibility to respond to our community, both its issues and its population, and offer them an opportunity to engage with our productions beyond the stage, to discuss and debate the core of what our artistic work is trying to say and what it means to say that now, today, here.

Throughout The Rape of Lucretia and The Handmaid’s Tale, BLO partnered with Boston Area Rape Crisis Center (BARCC) and Casa Myrna (Boston’s largest provider of domestic violence resources) in preparation for and during these the productions. This level of engagement is unprecedented in this organization, and I feel immensely grateful I got the opportunity to assist BLO as community engagement takes a larger role. Beyond the

daily tasks of managing outreach and engagement, I’ve learned that applying what my graduate program is teaching me entails two critical first steps: mindful acknowledgement that engagement is necessary, the application of that engagement in such a way that it supports an organization’s goals for intended impact. Kit Cali, the development assistant for Casa Myrna, remarks in an article written for BARCC’s blog: “We must both speak out and listen. Knowing the statistics...is important, but artists have the power to create not just awareness but also to foster a deeper empathy and understanding in those it touches. Art can teach us how to hear the people around us and to see when they’re struggling.”

I received my 25-Hour Massachusetts State Training in Domestic Violence Counseling in May of 2018 and began my Master’s degree in Theatre Education for Community Engagement in September that year. In both of these fields, at the center of the work is a focus on human impact, human connection, and human resilience. Lucretia and Handmaid’s both tell tales of violence against women, which is by no means rare on the operatic stage, but these operas are distinctly about the impact of violence, trauma, and loss of agency on the individual, more so than the violence or perpetrator itself. As I researched and wrote the Educational Study Guides for Lucretia and Handmaid’s, not only did I explore historically the power dynamics present in these operas, but the impact certain stories and certain music being publicly presented in certain social climates had. It would be irresponsible to neglect the realities surrounding BLO’s presentation of these operas. What is also present in these study guides are resources for students and individuals to seek help if they need it, to volunteer, or simply to learn more.

BLO states its intent for this partnerships on their website, “At BLO, we believe that art can be a catalyst for conversation, for healing, and for action.” At the partnership’s beginning, BARCC and Casa Myrna conducted a workshop that deepened our staff’s understanding of domestic violence and sexual assault, as well as the resources available. This training offered staff a firm and united foundational understanding of the subject matter, especially as we interacted with audience members and the general public. I believe this was one of the most critical steps in the process. Furthermore, staff from BARCC and Casa Myrna were present at each performance as a resource, and several times participated in our Talkback panels after the performances. During the first Rape of Lucretia talkback, I witnessed audiences engage with the subject matter passionately, interpreting Sarna Lapine’s directorial decisions through today’s lens, as she had herself.

In addition to our partnerships with BARCC and Casa Myrna, student programs were navigated a little differently for these two productions. Aside from the additional resources presented in the study guide, post-show discussion groups were offered during Rape of Lucretia, facilitated by a BLO teaching artist. Additionally, numerous student ticket offers went out to colleges and high schools, ranging from free tickets to the dress rehearsal, to discounted tickets for other dates. The simple matter of access is not one to be understated, especially in a town populated with performing arts students with the desire to see relevant theatrical and musical productions. The more people who can attend, the greater the impact, and economics should not be a barrier.

Coming in as an intern, I find it critical that BLO is not only not shying away from difficult conversations and the greater trend of community engagement coming to the forefront of artistic organizations, but leading the initiative as the largest opera company in New England. Domestic violence and sexual violence affect individuals across gender, race, class, and age. As someone whose life has been touched by both of these, and certainly not the only person who came into that theater in March and May with that experience, it was a weighty responsibility for Boston Lyric Opera to have informed staff, resources available, and opportunities for discussion, education, and healing.

While we can put in numbers the students that attend our dress rehearsals, the number of patrons who stay for our Talkbacks, even the number of staff that have now been trained in basic sexual and domestic violence understanding, we can’t necessarily assess what I value as the most important—the individual impact. Perhaps a better way of approaching community engagement in the arts is instead of asking what does it mean to present these operas today, we ask, what could it mean? How can we strengthen our stance? How can BARCC being present impact one person? How can the opportunity to see this opera as a 17 year-old college freshman impact that individual? How can this show change one person’s mind? The hope for change makes the work worth doing.

Sarah Zimmer is the Community Engagement & Education Intern for the 2018/19 Season. She is a graduate student at Emerson College.

Images (top to bottom): Kelley O'Connor as Lucretia and Duncan Rock as Tarquinius in The Rape of Lucretia; Caroline Worra as Aunt Lydia surrounded by Handmaids in The Handmaid's Tale. Both by Liza Voll Photography.