You may have noticed that the famous historical diva, Jenny Lind, has been getting a lot of press lately! Known as the “Swedish Nightingale,” she toured extensively in the 19th century under the management of P.T. Barnum, who capitalized on her beautiful voice and lovely appearance. 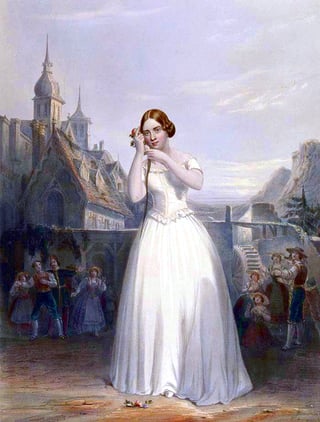 This is not the first time that Jenny Lind has been the center of a Boston Lyric Opera event. In March of 1978, BLO presented an entire show dedicated to Jenny Lind, which featured all of the works for which she was most famous. Boston Lyric Opera’s Jenny Lind Gala Production featured Elizabeth Parcells as Jenny Lind and included Robert J. Lurtsema as P.T. Barnum, who opened the gala in true showman fashion. It appropriately began with one of her favorite arias, “On Mighty Pens,” from Haydn’s The Creation.

Jenny Lind reportedly always began her American concerts with a sacred English piece in order to set the tone for her concert and create an uplifting atmosphere. It was said by Randolph J. Fuller, who wrote the program notes, that “for Jenny Lind, a concert was not an occasion for mere idle entertainment. Rather, she conceived it as an event which ought to be morally and spiritually uplifting.”

Though Barnum may today be associated with circus gimmicks, Jenny Lind was quite the opposite. She was a true operatic talent that inspired both poets and composers to create new works in her honor. Prominent composer Felix Mendelssohn composed “Hear Ye, Israel” from his oratorio Elijah with Lind’s voice in mind, particularly because he knew she could hit the high F# he included in the part!

Though 40 years have passed since BLO’s gala, Jenny Lind and P.T. Barnum remain fascinating and influential figures in the history of American culture. Explore their lives and legacy, along with the poetry and presence of Walt Whitman at  on February 11th at the Museum of Fine Arts from 2:00pm-3:00pm.  Please join us for The Bard, the Diva, and the Showman!