"Brecht hated opera”—a bit simplistic and overstated, granted, but perhaps not entirely inappropriate for dealing with the polemical, articulate, and highly opinionated mind and beliefs of this protean playwright, poet, composer, director, actor, producer, designer, performer, and theoretician. Certainly Brecht despised opera productions and audiences of his day as the complacent, corrupt, corrupting, and falsely “artistic” manifestation of an elitist, greedy, capitalistic society. He wrote, “We see entire rows of human beings transported into a peculiar state of intoxication, wholly passive, self-absorbed, and according to all appearances, doped.” But upon further examination, the situation becomes more ambiguous. (At this point, let me acknowledge my reliance for much of this material—here so briefly touched—on Joy H. Calico’s excellent, detailed, and very stimulating book, Brecht at the Opera.) Indeed, as Calico points out, “opera’s continued presence is one of the few constants in a life marked primarily by upheaval and flux.” And Brecht’s contentious engagement with Wagner’s theories on theater and opera—he railed against the composer’s baleful, narcotic use of “endless melody” and unresolved chromatic harmony (and the hiding of the mechanics of musical production with the covered orchestra pit) in order to seduce an audience into total submission—shaped Brecht’s own development of his ideas on Epic Theater and the desired active role of the spectator in the performance event. 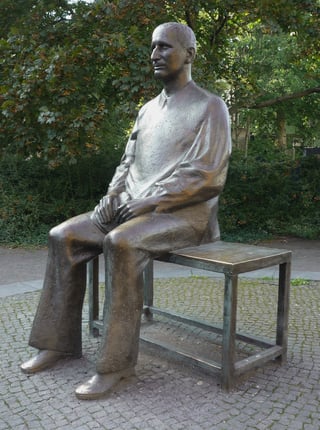 In the 30 years between 1926 and his death in 1956, Brecht took on roughly two dozen opera projects. Most familiar are Brecht’s three “completed” operas: The Threepenny Opera, The Rise and Fall of the City of Mahagonny (both with composer Kurt Weill), and The Trial of Lucullus (conceived as an opera, but completed as a verse radio play with music by composer Paul Dessau). These works have, certainly in the case of the Weill pieces, become staples of the conventional international opera house repertory (perhaps ironically, given Brecht’s intentions). But he also wrote many other variations on quasi operatic forms (The Seven Deadly Sins, for example—another project with Weill that is oft-revived today), as well as bits of abandoned scenarios and librettos and unrealized projects: other operas with Weill, an operetta to be written with Hanns Eisler as a vehicle for Mae West, an African-American adaptation of Threepenny set in Washington, D.C., opera
collaborations with Aaron Copland and Carl Orff, and (perhaps most intriguingly) a film version of The Tales of Hoffman pitched to Hollywood director Lewis Milestone in 1947. In the final year of his life, Brecht discussed with Dessau an opera about Albert Einstein. And most certainly, music, particularly song, played a crucial role is all his dramatic work from the beginning.

The influence of Brecht on theater and performance today—and the pervasiveness of the term “Brechtian” (perhaps to the point of meaninglessness)—cannot be overstated. “Alienation” and “estrangement” are also words that are inevitably associated with his theories…complex words translated (or mistranslated?) from the German, which have in turn “alienated” the public, who have branded Brecht in their view as a tedious, didactic, pleasuredenying bore. But his theories and ideas are perhaps more
stimulating, evocative, and, yes, pleasure-giving (on a deeper level) than they might appear. As we have said, Brecht railed against the narcotic effect of Wagner’s music, but also against the apparent “realism” engendered by the imposition of the wellknown “fourth wall” between the audience and the world onstage by playwrights such as Ibsen. Brecht wanted to renew the power of the spectator…to give him back the reality of his own imagination, to take away the visual and psychological elements created by the dangerously soothing illusions of theater, to “clear the underbrush.” The spectator should always be made aware of and should always recognize the basic superficial falseness of a production, should always see the lights and the mechanics, and the actor acting… it is the task of the theater-makers to make the familiar “strange” in order for the spectator to see into its essence.

In the Epic Theatre, then, actors play multiple roles; they break the fourth wall to address the audience directly; placards indicate scenes or locations; equipment is placed in full view of the audience; and so on. Brechtian alienation becomes not something that pushes the audience member away; instead, the spectator is actively engaged, charged with evaluating and understanding the work and its implications for the “real” world outside the theatre walls—rather than allowed to lose oneself in a sea of music and emotion that (Brecht believed) lessened any possibility for action or change. 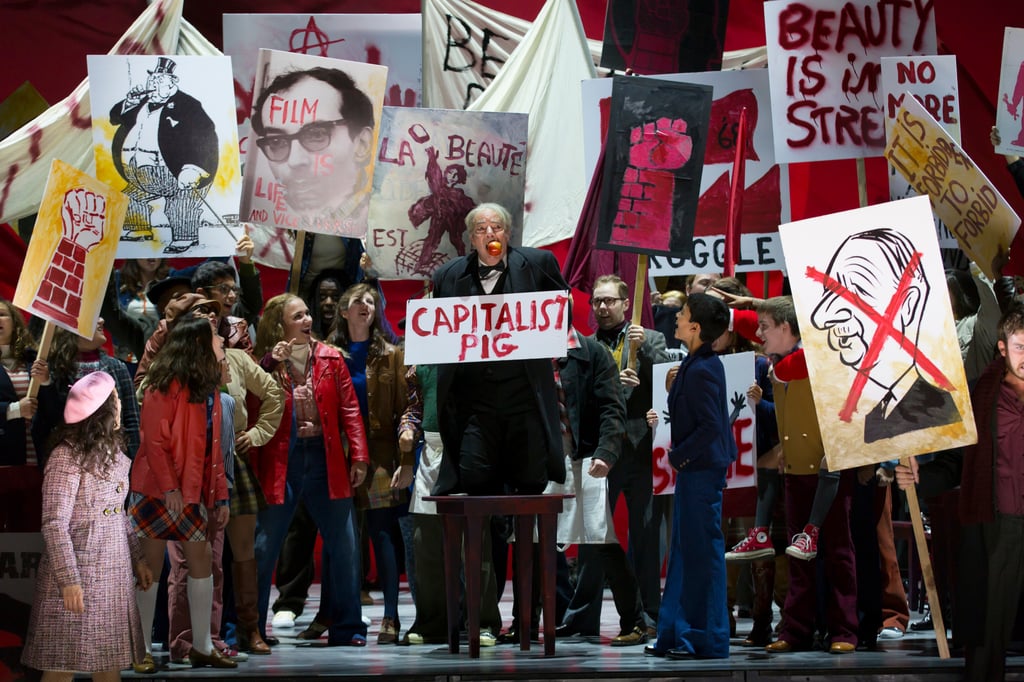 In two recent productions at Boston Lyric Opera, the director Rosetta Cucchi and I drew, in part consciously, upon the stimulating and challenging spirit of Brecht. We were dealing with the formidable task of presenting two extremely familiar, deeply cherished works—La Bohème in the 2015/16 Season and The Marriage of Figaro in 2016/17. We felt that it was appropriate (and perhaps necessary) at this point to attempt to look at the works in a different context…to, in a sense, “de-sacramentalize” them… to perhaps allow audiences (and members of the production team and cast) to experience them anew.

We therefore carefully chose to set Bohème amidst the youthful upheaval of the student riots of 1968 Paris, drawing on images and techniques from New Wave filmmakers Jean-Luc Godard and François Truffaut (themselves strongly influenced by Brecht). Added to and set against the late 19th-century aural world of Puccini, we introduced the sounds of news broadcasts, political orations, police sirens, and students chanting at violent demonstrations, highlighting rather than erasing that world. We employed title signs and quotations to deliberately fragment and de-familiarize the theatrical experience.

In Figaro we used the overt context and mechanics of a rehearsal—a full view of the backstage, rehearsal-style props, and stagehands present, visible and active in the creation of the narrative. We set the production in the more familiar social hierarchy of the 1950s, drawing on the classic Billy Wilder film Sabrina, although retaining the Italian milieu. On the front curtain was written the title and the phrase “Figaro...A Work in Progress.” This was clearly a reference to the rehearsal context of the production…but in a deeper sense, it also suggested what Brecht sought in theater (and opera). Theater and opera are not set notes on a page, an inviolate text or a sacred object in a museum, but rather a living experience that exists in the vital intersection of a particular set of performers, in a specific world, with a specific audience…an experience always to be embraced as “a work in progress.”