Benjamin Britten in Rome: The Rape of Lucretia

These tragic figures preoccupied composer Benjamin Britten (1913–1976), inspiring him to become the first modern British composer to achieve international success in opera, chief creator of the Aldeburgh Festival (1948), and founder of the English Opera Group.

The Rape of Lucretia, begun during the last years of World War II, marks a decisive break with the grand opera tradition. An amalgam of frenzied emotional power and expressive richness, it is the most transparent and tension-filled of Britten’s mid-century works, combining his beautiful melodic writing with dramatic pungency and colorful tone painting. Lucretia’s unstable mix of pagan brutality, sexual politics, and passionate Christian moralizing, shows Britten struggling to find meaning in the post-war world.

THE COMPOSER
Already an accomplished pianist and vocal composer by the age of twelve, Britten became a pupil of the pacifist Frank Bridge. He hoped to continue on to study with Arnold Schoenberg in Vienna, but his mother vetoed this during the turbulent 1930s. Britten excelled at melody, literary choices, and character development, naming Purcell and Mozart as his most important influences. He contributed to every type of vocal and choral music over his long career.

A Conscientious Objector, Britten did contribute music for government films in the 1930s, but felt that he was not at home in British society, both as a pacifist and as a gay
man. After the outbreak of World War II, Britten left England with tenor Peter Pears and writer W.H. Auden, ultimately spending most of 1939–1942 in America and Canada. During this formative period, Britten wrote the operetta Paul Bunyan (1941), major orchestral works including his Sinfonia da Requiem (1939) and Violin Concerto (1939) and conceived Ceremony of Carols (1942) and Peter Grimes (1942–45). A combination of economic realities and aesthetic preferences intensified Britten’s operatic vision, producing early sketches for the intense, chorus-less chamber operas The Rape of Lucretia (1946) and Albert Herring (1947), followed by the all-male Billy Budd (1951) and his intimate work based on Henry James’ The Turn of the Screw (1954).

Britten championed the anti-hero in his dramatic settings. His characters can be confrontational, self-abnegating, deluded, and ineffectual—no match for the societal forces that enmesh them. The Rape of Lucretia deals with the corruption of innocence and the outsider in society, themes that also dominated his 1945 triumph, Peter Grimes. In both tales, love has no redemptive or revisionary potency: it confounds, rather than liberates. Scholar Donald Mitchell has written about how the damage wrought by“cultural climates of violence” forms an overarching theme in Britten’s music.

Britten’s love scenes are unusual in the operatic canon; his characters’ abilities to act and to love are often obstructed or doomed by repressive societies. In Peter Grimes, Grimes and Ellen Orford attempt two hopeful, but ultimately failed love duets; in Gloriana (1953), Elizabeth and Essex attempt intimacy, but are constrained by social conventions. Degraded and one-sided love songs haunt the protagonists in Death in Venice (1973) and The Turn of the Screw. The youthful indiscriminant lovemaking in his Midsummer Night’s Dream (1960) contrasts starkly with his chamber operas, and at the climax of The Rape of Lucretia, Lucretia and her husband only share the stage once, eulogizing their relationship just before she sacrifices herself.

THE WOMAN
The historical legend of Lucretia (d. 508 BCE), the self-sacrificing Roman heroine, has inspired European authors and composers of every area. The Roman historian Livy’s account in Ab Urbe Condita Libri (28–25 BCE) was adapted into verse by Ovid in Book II of his Fasti (8 CE), and later repeated in Roman Antiquities by the Greco-Roman historian Dionysius of Halicarnassus. What began as history became a morality tale about treachery, purity, and honor: Lucretia is raped by her kinsman Tarquin (a prince), and chooses to commit suicide after confessing to her husband. “Though I acquit myself of the sin,” she says in Livy, “I do not absolve myself of the punishment. No woman shall use Lucretia as her example in dishonor.” Her family declares war against Rome,eventually establishing the Republic. 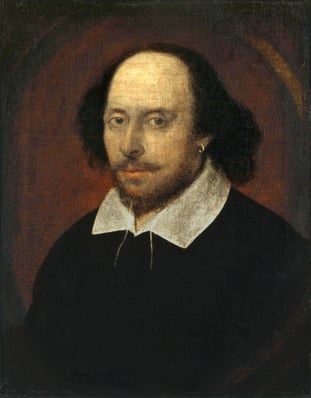 During the middle ages, Lucretia was a popular subject for morality tales. St. Augustine used her to defend the honor of Christian women who had been raped in the sack of Rome (The City of God, 426 CE). She appeared to Dante among the “virtuous pagans” in Limbo (Canto IV of The Inferno). Eventually, Lucretia was venerated as both a martyr on whose grave the Roman Republic was built and as a paragon of wifely virtue; her death
inspired tragic portraits by Renaissance masters such as Titian, Rembrandt, Raphael, and Botticelli, one of twelve chapters in Chaucer’s The Legend of Good Women, and Shakespeare’s 1594 poem The Rape of Lucrece (based on Ovid). She is mentioned in As You Like It, Macbeth, Titus Andronicus, and Twelfth Night.

Lucretia’s legend has inspired controversial interpretations: colonial Mexican poet Sor Juana Inés de la Cruz mentions Lucrecia in her poem Las Redondillas: A Philosophical Satire (1689) which is a commentary on prostitution and who is to blame. In Samuel Richardson’s 1740 novel Pamela; or, Virtue Rewarded, Mr. B and Pamela propose alternate readings of the legend.

THE LIBRETTO
Ronald Duncan’s compact libretto for Lucretia, after André Obey’s 1931 play Le Viol de Lucrèce, is ultimately based on Shakespeare’s poem, but omits a crucial scene, in which Tarquin threatens to kill a slave to dishonor Lucretia. Italian modernist Ottorino Respighi’s last opera (Lucrezia, 1936-37) was also based on Obey’s play. Obey presents two narrators (called Male and Female Chorus by Duncan) as objective, humane soloists who distance the audience from the action, commenting “out of time” (as in Greek tragedy). The recent Glyndebourne revival of Britten’s work locates the Chorus as a pair of war-traumatized archaeologists, piecing the narrative together from found fragments. The dramatic structure of the opera is unusual, as the libretto interweaves allusions to Christ’s suffering as either a parallel or a solution to the heroine’s suffering. Britten called for solo piano accompaniment to accompany recitative passages, emphasizing “classical” poise and detachment. 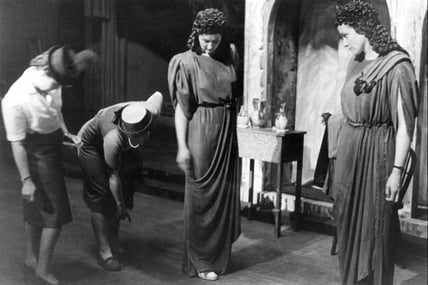 Britten revised the work in 1947. The opera’s influence was immediate and long-lasting; Agnes de Mille restaged Lucretia on Broadway two years later with Kitty Carlisle. The success of Lucretia and its compact production inspired Eric Crozier to propose the
classical tragedy of Phaedra as his next opera, but it was three decades before Britten and Peter Pears returned to the idea. That tense, brooding work, adapted from Racine’s masterful Phèdre, brought a similar heroine to life: the instrument of others’ suffering, Phaedra falls victim to her own impulses, inspiring both terror and pity (Odyssey Opera
presented this work in Boston three seasons ago).

Britten recorded the work (featuring Janet Baker and Peter Pears) alongside his later Phaedra (Decca, 1970), and three recent Lucretias celebrate Britten’s lasting legacy in England: Chandos’ 2001 recording of the English National Opera, Virgin Classics recording from the 2011 Aldeburgh Festival, and the 2013 DVD of Glyndebourne’s touring production from Britten’s centenary year. Lucretia provides us with the chance to hear some of Britten’s best work, beautifully acted and sung. The story has a harrowing immediacy, presenting relationships buckling under the strain of tragedy, lethally
handsome anti-heros, and a heroine’s search for purity in a violent world.

Learn more about The Rape of Lucretia in our student study guide, or purchase tickets:

Images (top to bottom): Publicity photo of Benjamin Britten taken by Hans Wild for High Fidelity Magazine (1968). Portrait of William Shakespeare by John Taylor, National Portrait Gallery (1610). Nancy Evans and Kathleen Ferrier (who both originated the role of Lucretia) getting their costumes fitted at Glyndebourne (1945).