Catching up with Claude Heater: Original Trio Member in Trouble in Tahiti 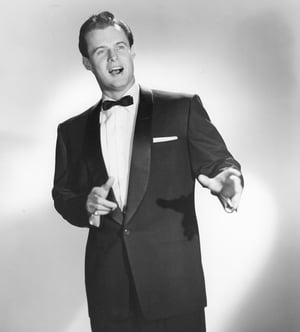 As far as Google can tell, Claude Heater is the only member of the original cast of Bernstein’s Trouble in Tahiti who is still alive. Back in 1952, Heater was the baritone in the vocal trio that breezily comments on the action and functions as a kind of Greek Chorus.

Today, Heater is 90 and frankly confesses he doesn’t remember much about the premiere beyond the fact he sang in it. There is no reason why he necessarily should. The premiere was 66 years ago now, a single performance in a long and varied career, and his part in Bernstein’s opera was limited in comparison to some of his later roles, like Wagner’s Siegfried and Tristan, and Verdi’s Otello – a part he performed here in Boston in 1962 for Sarah Caldwell in a prestigious cast that included soprano Renata Tebaldi, the reigning Desdemona of her generation, and Ramon Vinay, one of the two reigning Otellos of his own generation; by 1962 Vinay had returned to his origins as a baritone and took the villain’s role as Iago here.

Heater does have lively memories of Bernstein and of many other figures in his long and vigorous life. And in a casual phone conversation from his home in California recently, he didn’t hold back.

He grew up in California and served both in the Marines and as a Mormon missionary before heading to New York. In 1950, after studies in the American Theater Wing, he wound up in the chorus of a Broadway show starring Phil Silvers, Top Banana. The program listed Heater as an actor and a juggler, and it was at that time he met Bernstein, who a couple of years later hired him for Trouble in Tahiti. The original cast featured other singers with Broadway credentials, except for the mezzo-soprano Nell Tangeman, who had sung Jocasta in Stravinsky’s Oedipus Rex as early as 1945. She also went on to sing in the world premiere of Stravinsky’s The Rake’s Progress, although her career was primarily in recitals and orchestral appearances where she was particularly valued in contemporary music. David Atkinson, who sang the lead role of Sam opposite Tangeman’s Dinah, sang regularly at the New York City Opera whenever he was not appearing in one of the classic Broadway baritone roles; he became particularly successful in Man of La Mancha which he sang for years on and off Broadway. So it is clear that Bernstein wanted singers for his opera that could put over words at a Broadway standard (and this was before Broadway started amplifying singers). 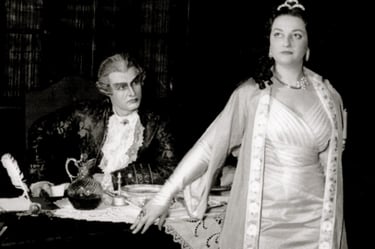 Heater had set his sights on opera, although he did return to Broadway to sing in The Most Happy Fella. For seven seasons he was a regular at the San Francisco Opera when he wasn’t busy making a name for himself in Europe. In his early baritone years there he sang in Basel where his leading lady in Tosca and other operas was the equally young Montserrat Caballé. In1957 Herbert von Karajan brought him to the Vienna State Opera where he sang leading baritone roles for three seasons; Karajan also took him to La Scala.

Heater makes an interesting comparison between the styles of Karajan and Bernstein. “Lenny was a sweet, warm, caring person. Talk about love for your fellow men, all of them, from the highest to the lowest. Lenny really did believe that all men are brothers. Dealing with someone as aloof and superior as Karajan was quite another matter. Years later, at the stage door in Vienna, Lenny would call the doorman by name and stop to speak with him; that was beneath Karajan – ’I am Herbert von Karajan and you are a servant’ was his attitude. I was so glad and so proud when Lenny became such a star in Vienna.”

Heater ran into Bernstein in Rome in the early 1950s and told him he was retraining his voice as a tenor. Bernstein told Heater to keep and touch and called him in Milan in 1955, when Heater was working on his voice with his neighbor the great Italian tenor Mario del Monaco. “Lenny said he could arrange an audition for me at La Scala but I told him it was a bit early for that, and then he invited me to the closed dress rehearsal for a production of La Bohème that he was conducting. At intermission I saw an incredibly beautiful woman sitting behind two older men in the balcony. She looked very chic, her hair pulled back, and I thought she was a model or something. During the break in the lobby I saw Lenny’s wife Felicia standing and talking to the incredibly beautiful woman, who was wearing big sunglasses, and Felicia introduced her to me as ‘Signora Meneghini.’ I didn’t quite catch the name but I remembered How To Win Friends And Influence People, so I asked her if she would mind repeating her name. She looked at me and took off her sunglasses and she said one word. ‘Callas.’ I wished the earth would swallow me whole. I had seen Callas several times onstage, but she was 40 or 50 pounds overweight at the time and she had become so thin I didn’t recognize her.”

It was during his in-between period of vocal development that Heater gave a recital that was attended by the production manager for film of Ben Hur. Let Hollywood columnist Louella Parsons tell the rest of the story: “[The production manager] was struck by the singer’s voice and his beautiful, spiritual face, and told William Wyler, the director, about him.” Wyler screen tested him and hired him for the role of Jesus Christ. His face is not visible, for legal reasons, but his height, carriage, and auburn wig still make a powerful impression – you can see the scene on You Tube. Heater and the star of the film, Charlton Heston, became friends, and attended a screening celebrating the 50th anniversary of the release of film – the only two members of the cast who were still living.

Heater’s second career as a Heldentenor lasted nearly 20 years; one of the reasons he lasted so long is that he prepared his Wagner roles, Erik through Siegmund (“no higher than Renato in Un Ballo in Maschera”) and Siegfried, Tannhaeuser, Tristan, and Parsifal, under the guidance of Max Lorenz, the greatest German Heldentenor of the previous generation. Heater was primarily based in Munich and Zurich, but he also often sang elsewhere in most of the leading opera houses of Europe including Bayreuth; in onetwo-year period he sang Tristan in eight different productions of Wagner’s opera. In Belgium he made two films of Tristan and you can see one of them on his website. His sopranos included Birgit Nilsson, Gwyneth Jones, Astrid Varnay and Leonie Rysanek (as a baritone he had sung in Lucia di Lammermoor with Joan Sutherland).

He has particularly fond memories of his Munich colleague Fritz Wunderlich, with whom he often sang in Mozart’s The Magic Flute. “He was such a good singer and such a sweet guy, and it was tragic when he fell down the stairs and killed himself before his debut at the Met. How could God allow that to happen with such a wonderful person?”

He had a special regard for the Chilean tenor Ramon Vinay, whom he had seen as Otello at the Met. “Most of us just played Otello as epileptic. Ramon stiffened up and fell flat on his back. Who would have the gut to fall straight on his back, straight as an arrow on the stage?” Heater regards the opportunity to sing Otello here in Boston opposite Vinay as Iago as one of the greatest honors of his career.

In addition to all the things Heater did, there were proposals that didn’t work out that he regrets. Bernstein talked to him about Tristan for a production that fell though; Wieland Wagner had big plans for him at Bayreuth, but then died before they could be realized.

But Heater does not seem to indulge himself with regrets. After his performance career ended, he busied himself running an opera company (in Oakland, California) and with teaching – he still teaches now and sings a little – and even ran for Congress. And you don’t want to ask him what he thinks of Donald Trump.

He also has plenty to say about the operatic world of today, both in voice training and in staging. One of his pupils, who could sing a good Otello, went to Europe to work on his Wagner. When he returned to America he was “squeezing and clamping down on his voice. I told him to forget everything they had taught him. You have to sing Wagner the way an Italian would – that stood me in very good stead.” About staging he says, “Too often singers are treated like just another prop; they are not allowed to convey what good singing alone can convey. They tell you to stand on your head or run down steep steps while singing high notes or they have the chorus doing naughty things while you are singing. Yes, it’s important to look good. No one wants to look at a fat waddly guy who couldn’t even pick up a sword, let alone slay a dragon with it. But the public comes to hear people who know how to sing, who are convinced that what they are doing has validity for people who know how to use their imaginations.”

Don't miss the final performances of Trouble in Tahiti:

Images (top to bottom): Claude Heater during his Broadway days (Broadway Open Photo); Heater as Scarpia with Caballé as Tosca in Basel, 1956.