Confronting Sexual Violence Onstage: The Rape of Lucretia and The Handmaid's Tale

On October 5, 2017, The New York Times published an explosive story about sexual assault allegations against Hollywood producer Harvey Weinstein. As is now well known, Weinstein abused his power in order to harass young, talented women, luring them to offices

or hotel rooms and threatening to destroy their careers if they refused his advances. Later that month, I attended BLO’s production of Tosca; on the stage of the Emerson Cutler Majestic Theatre, I watched a powerful man corner a young, talented woman in his private apartment and try to rape her. The similarities were purely coincidental, but they were chilling. It was as if the quasi-historical Rome depicted in Puccini’s opera was being overlaid onto the present day, the distance between the two collapsing into a frightening sameness. I wasn’t sure how to reconcile my many reactions: appreciation for the beauty of Puccini’s music, admiration for the singers’ talent, and guilt for thinking about anything other than the opera’s depiction of attempted sexual assault. What was I supposed to feel? How should I respond?

Attendees of The Rape of Lucretia and The Handmaid’s Tale may have similarly complex responses. Like Tosca, both operas centrally feature scenes of sexual violence. This is nothing new; such scenes appear throughout the repertoire, from canonical works like Don Giovanni to new ones like Missy Mazzoli’s Breaking the Waves (2016). And as musicologist Micaela Baranello recently noted in The New York Times, even those operas whose plots do not revolve around the topic use gendered violence against women as a metaphor for social oppression. In short, if you go to the opera regularly, you will likely witness a depiction of sexual violence. Such representations are especially fraught in the age of #MeToo, which has brought long-overdue attention to sexual harassment and assault in the workplace—including several cases involving high-profile figures in the world of opera. While there is, of course, no one way to respond to the intensely personal experience of watching an artistic portrayal of sexual violence, the pervasiveness of such scenes in opera raises broader questions. What does it mean to portray sexual violence on the operatic stage? What are the artistic and ethical ramifications of doing so?

Let’s begin with the obvious. In both operas, a powerful man rapes a vulnerable woman. The Rape of Lucretia is based upon a story, first narrated in Livy’s History of Rome, about a noblewoman who is raped by an Etruscan prince, Tarquinius, and then commits suicide. With their operatic adaptation, Britten and librettist Ronald Duncan joined a long tradition of artistic renderings of the story, from Shakespeare’s poem The Rape of Lucrece (1594) to the 1931 play Le Viol de Lucrèce by André Obey. Yet this distinguished genealogy risks drawing our attention away from the story’s unavoidable, horrifying facts: Lucretia, awakened from a dream by Tarquinius, cries out more than twenty times for him to stop. He refuses. In The Handmaid’s Tale, adapted from the renowned 1985 dystopian novel by Margaret Atwood, the title character, Offred, is a young woman in a fundamentalist, Christian, patriarchal republic known as Gilead, in what used to be the United States. Her status as a Handmaid—the regime’s term for a woman enslaved for the purpose of bearing children—means that on a regular basis, she is raped by a powerful commander whose wife is unable to conceive. 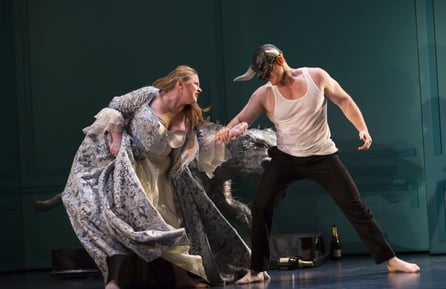 The parallels run deeper. In each opera, the core act of sexual violence is tied to other kinds of violence and abuses of power. For one thing, the rape of women is depicted as essential to political success. Traditionally, Lucretia’s rape was considered historically significant not because of its effect upon Lucretia herself, but because it precipitated the fall of the monarchy and the founding of the Roman republic. In The Handmaid’s Tale, Offred and other Handmaids are told that they must endure sexual violence to create new citizens for Gilead—in other words, that their exploitation serves a national purpose. Further, in Atwood’s novel, gendered violence is also entwined with racism: only white women are eligible to be Handmaids for powerful men, while women of color are sent to Gilead’s colonies to clean up radioactive waste. Together, the operas illuminate connections among misogyny, racism, and nationalism, showing how all intersect and entwine, adding up to a single pernicious system.

Both operas also deal with the question of gender and narrative control: in other words, who gets to tell the story of violence against women? Neither The Rape of Lucretia nor The Handmaid’s Tale provides an unambiguous answer to this question. Like most operas we hear, both were written by male librettists and composers—Ronald Duncan and Benjamin Britten, and Paul Bentley and Poul Ruders, respectively. Yet both BLO productions will be directed by women, and female singers, of course, bring their own interpretations and artistic choices to the stage. Each work’s respective history of adaptation adds another layer of complexity. Lucretia’s story historically has been told by men (take another look at the list of adaptations above). In contrast, Bentley and Ruders adapted The Handmaid’s Tale from a novel written by a prominent living feminist author and told from a woman’s point of view.

Similar narrative complexities appear within the works themselves. The Rape of Lucretia is narrated by a Male Chorus and Female Chorus who describe themselves as Christian interpreters of a pagan tale. At the end of the opera, as they attempt to make sense of what has transpired, the Female Chorus asks if Lucretia’s plight will have any lasting impact: “Is it all? Is all this suffering and pain...is this in vain?” The Male Chorus attempts to smooth things over. “It is not all,” he sings, because Christian redemption will save us. Deeply ambiguous, the scene draws attention to how men and women might respond differently to Lucretia’s story, resisting a neat conclusion. Some productions of The Handmaid’s Tale also make use of a framing device in which the opera begins with a prologue set at an academic conference, where a male scholar, Professor Pieixoto, details his discovery of cassette tapes recorded long ago by the Handmaids of Gilead. Although this prologue will not be part of BLO’s production, the opera’s overall structure, which bounces between the present-day scenes and flashbacks to a Time Before, gives a different reminder that our access to Offred’s experience is not uninterrupted; we do not have access to her innermost thoughts, and cannot experience precisely what she experienced. In both works, these distancing strategies might provide a level of comfort to audience members, reassuring us that the traumas depicted onstage are not actually occurring. 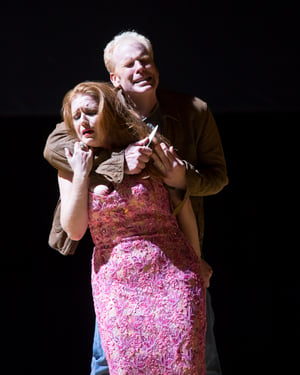 There remains a risk that operatic depictions of sexual violence can read as exploitative or gratuitous, or as wrongly aestheticizing something that is fundamentally horrifying. What, then, is the value of depicting sexual violence onstage? Can such portrayals help undo the oppressive conditions that they depict? While there are no blanket answers to such questions, both operas leave room for the possibility of meaningful social critique. For instance, a 2015 production of The Rape of Lucretia at Juilliard offered a feminist interpretation of the piece that connected it to rape culture on college campuses. Staged in a small, uncomfortably intimate space, the production forced audience members to witness Tarquinius’ brutality head-on, leaving no room for his actions to be romanticized or explained away. The Handmaid’s Tale, too, has a long history of profoundly relevant adaptations, both within and beyond the context of opera. The original novel responded directly to a global resurgence of religious fundamentalism and radicalism: it was written at the height of a conservative Christian backlash against 1960s-era social movements for civil rights, women’s rights, and gay rights, as well as global developments like the establishment of a theocracy in Iran. The operatic adaptation has inspired similar analyses: at its 2003 U.S. premiere, for instance, critics compared the totalitarian landscape of Gilead to Afghanistan under the Taliban. More recently, the popular Hulu online streaming series based on the novel has garnered notice for what New Yorker TV critic Emily Nussbaum called its “grotesque timeliness” and “Trumpian parallels”; even more starkly, activists protesting Brett Kavanaugh’s confirmation hearing (among other events) dressed in costumes inspired by the novel.

However politically relevant or creatively interpreted these two operas may be, the centrality of sexual violence means that they are not easy to watch. Nor should they be. Both The Rape of Lucretia and The Handmaid’s Tale remind us that art’s closeness to reality can be unnerving; that we cannot always leave the outside world at the door and escape into a different one, even temporarily. Yet that same sense of uncanny discomfort might point toward another of opera’s essential functions: to use the power of art to illuminate injustice, shake us out of complacency, and understand something new about our world.

Learn more about The Rape of Lucretia, The Handmaid's Tale, or purchase tickets: