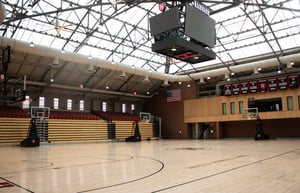 BLO's new production of The Handmaid's Tale, which will be performed at the Ray Lavietes Pavilion at Harvard University, a basketball gymnasium, is a rare opportunity to see an opera in the physical location in which it is set. In the fictional world of the novel by Margaret Atwood and opera by Poul Ruders and Paul Bentley, as the new totalitarian government is established, our narrator finds herself in a reeducation center known as the Red Center to be indoctrinated as a Handmaid, which she notes used to be a school gymnasium.

Later, renamed as Offred and now the Handmaid of a high-ranking commander, her occasional opportunities to go out of the house and her memories of the “time before” identify her location as Cambridge, Massachusetts, and specifically many iconic Harvard University buildings—thus making us wonder if perhaps the gymnasium that BLO has chosen as the venue for its production is the very one Atwood had in mind as she was writing. Spaces that were once accessible to students and the public, such as dormitories and the boathouse on the Charles River, are now off-limits to all except Gilead’s Secret Police, nicknamed the Eyes. Shops, which once dotted Church Street, and entertainment centers, such as the Brattle Theatre, have been turned into memories for Offred. The most notable location is the Harvard Wall that encloses the university, which is now where bodies hang.

Atwood spent some time in Cambridge when she completed her graduate degree at Radcliffe in the early 1960s. Radcliffe College was founded in 1879 as Harvard’s counterpart for women, before women were admitted to Harvard. The schools merged in 1963—a year after Atwood conferred her degree—completing full integration in 1999. 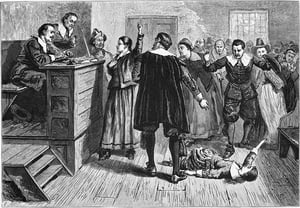 Puritans believed that the devil walked in their midst, and witches were believed to consort with evil and dark magic. The trials and execution of these so-call witches were believed to root out evil and protect the piety of the community. Margaret Atwood learned she may be a descendant of Mary Webster who is known for having been accused, tried, and hanged for witchcraft in 1689, (although she survived!) in Hadley, MA, several years before the infamous Salem Witch Trials. Atwood dedicated her novel, The Handmaid’s Tale, to Mary Webster, as well as to Perry Miller, a scholar of American Puritanism who was Atwood's mentor at Harvard.

Atwood’s decision to set her narrative in Cambridge was a conscious one. Though today the public knows Harvard as a center for liberal education and civic engagement, its roots are as a Puritan theological seminary—the religious inspiration at the core of Gilead’s ideology. Harvard’s inception in 1637—then The College at Newtone (before Newtone was renamed Cambridge)—was soon after the first boats of Puritans arrived to found the Massachusetts Bay Colony. They anticipated the need to train additional clergy and established the seminary as a crucial step in securing their new society. After John Harvard, an English clergyman, donated a large sum to help the new school establish itself, the college was aptly renamed.

The Puritan movement believed that the Church of England had not gone far enough to separate itself from the Catholic Church after the Protestant Reformation. This was a long and drawn out division that founded several new Protestant denominations, many originating through Calvinist beliefs. Many of these Puritan Protestants gained power in political and commercial sectors. From these ties, a group decided to emigrate to found Massachusetts Bay Colony in the mid-1600s, seeking to establish a new society with a strong moral, religious, political and social code that would define its way of life. Some of these codes manifested themselves through strictly defined social and gender roles—men as spiritual heads of household with full authority and leadership through prayer, and women as pious wives and mothers, with complete submissiveness and humility.

Though the Puritan faith emerged out of religious dissent from the Church of England, throughout Harvard’s history as a theological seminary it has served as a forum for religious dialogue and dissent as the religious landscape continued to change both in England and the Colonies. Up until the early 18th century, Harvard was run by presidents of Puritan orthodoxy, and the school remained a prominent and prestigious seminary through the 19th century.  Today, Harvard Divinity School is not affiliated with a particular doctrine or faith, rather describes itself as a “nonsectarian school of religious and theological studies.”

This article is adapted from the BLO Student Study Guide for The Handmaid's Tale.