Lawrence St. Clair, MD is a Psychiatrist and Psychoanalyst, with a practice in Wellesley. He is co-Chair of the Board of Overseers of the Boston Lyric Opera and has written about operas and composers from a psychological perspective. 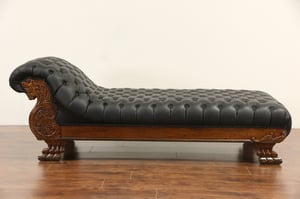 Trouble in Tahiti opens with Sam and Dinah, the supposedly ideal suburban couple, at home starting their day. The emptiness of their lives and the vast emotional distance between them is painfully obvious. After an icy breakfast scene, Sam goes off to work where he is absorbed in winning. The action then shifts to Dinah's psychotherapy session. She describes a long and involved dream.

To summarize, the dream starts with her in a depressing, dark, and dead garden. Her father calls, "Come out of this place." She tries, but there is no path. Seemingly trapped, she hears another voice, barely heard, that offers the most optimistic idea in the whole opera. With a haunting, wistful, painfully beautiful line, the voice says, come with me to a shining place where "love will teach us Harmony and grace . . . love will lead us to a quiet place." Dinah runs to find the singer but is blocked by burning ground, terror, angry shouts, and the roar of a million flies. The dream is interrupted when the action in the opera shifts back to Sam's office, where he tells his secretary to forget about the pass he made at her. Back at Dinah's therapy session, she continues with the dream. Now she sees the singer, "so handsome and serene"; he's just her age, seventeen. As she runs to him, he vanishes like smoke. Then she weeps softly, composes herself, and leaves.

Dinah's dream could easily be a real dream, giving us insight into the dreamer's emotions. Many of us, who remember our dreams, can recall similar dreams of frustrated wishes and disappointment. In its simplest form, the dream expresses Dinah's desire to go back in time to when she was young and would find a wonderful, healing partner. Her idealized mate will lead her to happiness, but now she's trapped in a dead garden. The music reflects the dream's drama. The struggles are dissonant, have odd intervals, all very unsettling. The garden is lyrical, wistful, and painfully beautiful. In contemporary therapy, the session would not have ended so abruptly. There would be some discussion of the dream.

When writing Trouble in Tahiti, Bernstein was very familiar with psychoanalysis and the use of dream interpretation in psychotherapy. In fact, throughout his life, Bernstein had a very passionate and personal investment in his own dreams. In letters to close friends and especially to his sister, Shirley, he discussed his dreams and what they meant to him.  Today's view of dreams remains very complicated. Dreams are a recurrent stage of sleep, common to all mammals, so they must have some important evolutionary function, such as processing emotions and/or incorporating memories. Freud proposed that dreams are an expression of unconscious desires, thoughts and motivations. My view is much broader: that the stories in dreams can reveal insights into what someone is feeling and how their emotions work. The use of dreams in psychotherapy varies greatly, with both the therapeutic method and a person's propensity to remember their dream. When appropriate, discussion of dreams can be very insightful. I expect that many people experience variations of Dinah's dream.

In 1940 when he was 24, Bernstein began therapy with Dr. Marketa Morris. He had just finished his studies at the Curtis Institute of Music and had moved to NYC. In a letter to Bernstein, Morris mentions that Bernstein had the hope that by understanding his dreams, he would resolve his conflicts about his sexuality.  In another letter she mentions that Bernstein often had dreams where he couldn't get to where he wanted to go. In his early 20s, Bernstein confided to Phyllis Moss, a fellow student at the Curtis Institute of Music, that he wanted to get married and particularly wanted to have children. "That was his dream. He was obsessed with that," she later recalled. On the other hand, in the late 1940s, Bernstein told his therapist, Renee Nell, that he had a great fear of being trapped in a dull marriage and leading a middle-class life. Trouble in Tahiti had both sides of Bernstein's view of marriage: harmony and grace and fulfillment versus the fear of being trapped in a loveless relationship.

Bernstein's stage instructions for Dinah's dream are very specific. They enhance the drama, but do not reflect what happens in real psychotherapy. In Dinah's dream scene the psychoanalyst is implied, but not seen or heard. Bernstein's directions state: "She is on a chaise lounge, recounting a dream. There is a straight chair, out of her vision, for the invisible Psychiatrist. Dinah sits up, relates the last part of the dream, weeps softly, overcome by the full sense of her frustration. Her weeping subsides. She gets up, collects her things, puts on her raincoat, and leaves " This silent and removed characterization of the analyst is curious, because I don't think Bernstein's therapy with Dr. Morris was like that. Their letters are very interactive, which implies lots of back and forth conversation. In the beginning of his work with Dr. Morris, Bernstein had little money, so they worked out a barter arrangement where he would teach her English in lieu of the fee. Dr. Morris had trained in Prague and fled to the US in 1938, so she was just learning English. He called her "the Frau," with a tone of familiarity rather than derision. Bernstein mentioned to friends in a number of letters how helpful his psychoanalysis had been.

Dinah's dream is interesting in another way. Bernstein sets Trouble in Tahiti in "any American city, and its suburbs." The libretto names twelve suburbs, five twice; locally Wellesley Hills gets two mentions and Brookline one. In the 1950s not many suburban housewives sought psychotherapy. New York City where Bernstein lived was an exception. The wave of psychoanalysts who fled to NYC from war torn Europe sparked an interest in psychotherapy and psychoanalytic theories. I wonder if Bernstein is suggesting that Dinah's continued therapy will help her resolve her sadness and marital issues. 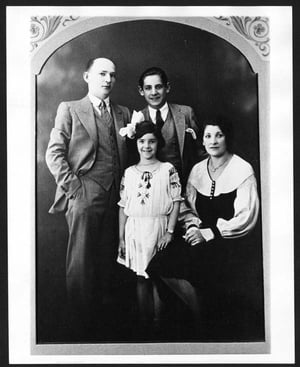 There is little doubt that Trouble in Tahiti is, at least in part, about Bernstein’s parents. Bernstein states that much directly in a letter to his sister, Shirley. Growing up they experienced considerable emotional tension despite economic comfort. In the first drafts of Trouble in Tahiti, he uses his parents' names, Sam and Jennie. Jennie was too difficult to set to music so he changed Jennie to Dinah, his paternal grandmother. In her oral history statements to the Bernstein Foundation, Shirley gives us some family details: "My mother and father were mismated, mismatched, both interesting and good people who should never have been married . . . They were never in love with each other, unfortunately." She describes a horrible argument when Lenny was 13 and she was 8. At breakfast their father flew into a rage when their mother asked him for 25 cents for Shirley's banking day at school. Jennie, very pregnant, ran into a bedroom. Lenny barred the door as Sam was threatening to hit Jennie with a milk bottle. Further strain occurred when Sam initially opposed Bernstein's music career. Sam didn't go to Bernstein's first big solo piano concert, which parallels neither parent going to Junior's play in Trouble in Tahiti. Bernstein had a major reconciliation with his father in November of 1943 and dedicated his First Symphony, Jeremiah, to him. 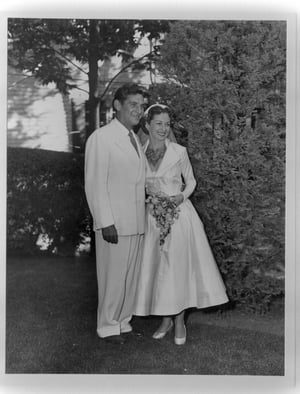 We'll never know precisely why Bernstein would write an opera with such a dim view of marriage just when he himself was getting married. Bernstein and his wife, Felicia Montealegre, had a very complex relationship. They clearly loved each other a great deal. They went back and forth about getting married for years before somewhat impulsively tying the knot. She was Catholic, but converted to Judaism. She accepted his bisexuality as long as he was content to live with her. People said that Bernstein trembled uncontrollably at their marriage ceremony. Bernstein's biographer, Humphrey Burton, speculates that in writing Trouble in Tahiti,  "Bernstein was administering a public rebuke to his father for the misery, as he saw it, of his childhood, although the real Sam is nothing like his operatic counterpart." Bernstein would come back to this operatic dysfunctional family in his later opera, A Quiet Place, which is set 30 years after Trouble, and has even darker themes.

Bernstein wove all of these biographical and imagined threads together in Trouble in Tahiti, exploring his own psychology and family history, expressing his hopes and fears, to create a work that is both universal and deeply personal.