Schoenberg flourished in the rich soil of Vienna at the turn of the 20th century…a loam full of nutrients such as Freud, Mahler, Schnitzler, but also deeply laced with the toxic wastes of anti-Semitism, virulent nationalism, and rabid conservatism. Surrounded by artists such as Gustav Klimt, Egon Schiele, and Oskar Kokoschka, the young composer even seriously considered a career as a painter. This aspect of a protean talent (he was also a renowned teacher, critic, and an important writer on music theory) opens new and revelatory insights into the complexities of this iconic creator. 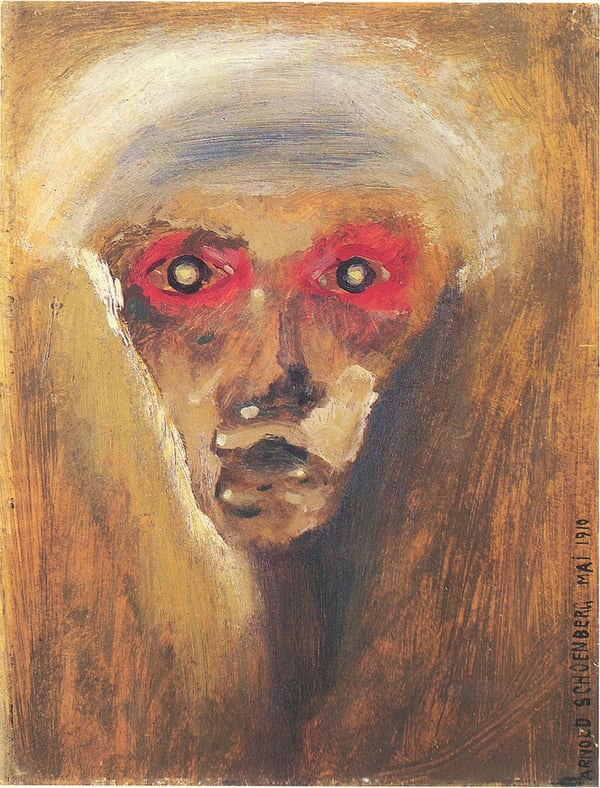 Painted by Schoenberg in 1910 as part of a series that he called “Gazes”, this has become a familiar icon of the deeply troubled, apprehensive gestalt of Europe on the eve of the catastrophe of WWI. The eyes—terrified, frozen, and helpless in the grip of apocalyptic panic—seem to gaze even beyond, further to the horrors that followed and engulfed the 20th century (along with Schoenberg himself) in their almost unimaginable chaos. 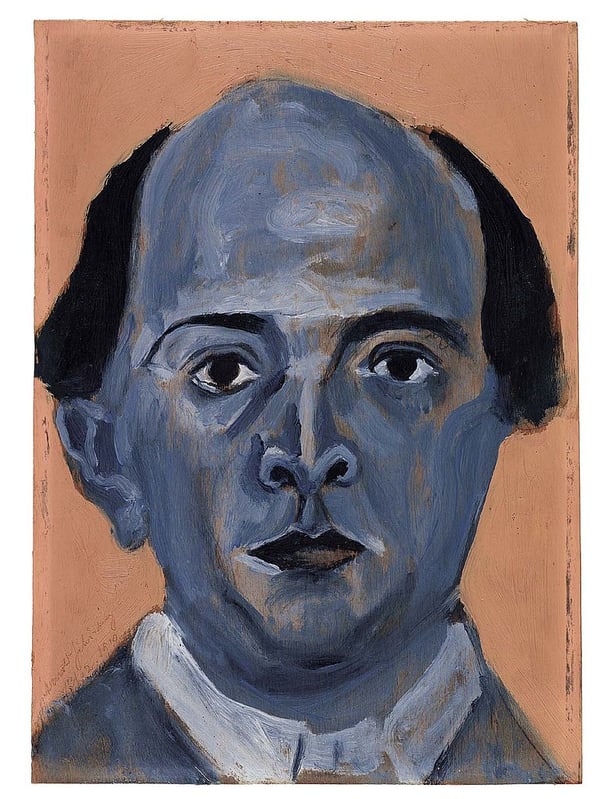 This work (painted in the same year as THE RED GAZE) was part of a number of deeply revelatory and probing self-portraits painted by Schoenberg. He painted over the course of his long life, but the majority of his work stems from the years before 1912. His paintings were shown in a small one-man show in Vienna in 1910 and again later in a group show, alongside works by Wassily Kandinsky, Franz Marc and Egon Schiele. Completely self-taught, Schoenberg’s paintings have been dismissed as crude or amateurish, but to many they are completely compelling and disturbing in their raw honesty and conceptual boldness—much, in the end, like his music. 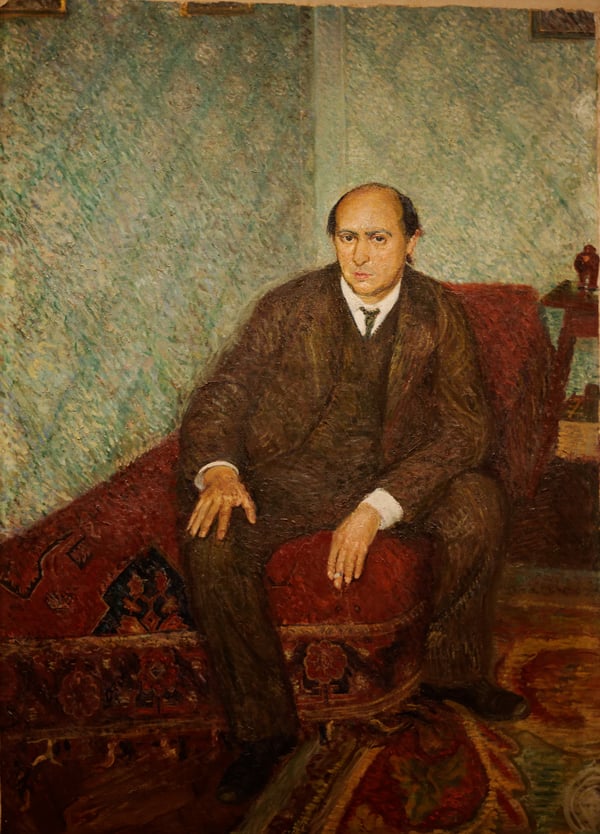 Gerstl, a rebellious, neurotic painter, became a friend and neighbor to Schoenberg and his wife, Mathilde. As Schoenberg became increasingly self-involved and obsessive in his own search for artistic fulfillment, she turned to Gerstl, eventually deserting Schoenberg and their child. She was reluctantly persuaded to return, and Gerstl subsequently committed a gruesomely melodramatic suicide, after destroying most of his canvasses. In the midst of these traumatic emotional upheavals, Schoenberg continued to paint and began to evolve his revolutionary style…works of torment, fracture, and deep beauty that discarded and rejected the tonal certainties of traditional harmony.

Here, in Gerstl’s portrait from 1906, Schoenberg sits like a sphinx or an idol…impassive, brooding, almost disembodied, ensconced in his suit and tie amidst the comfortable, outmoded, and useless bourgeois patterns of wallpaper and Oriental carpet. 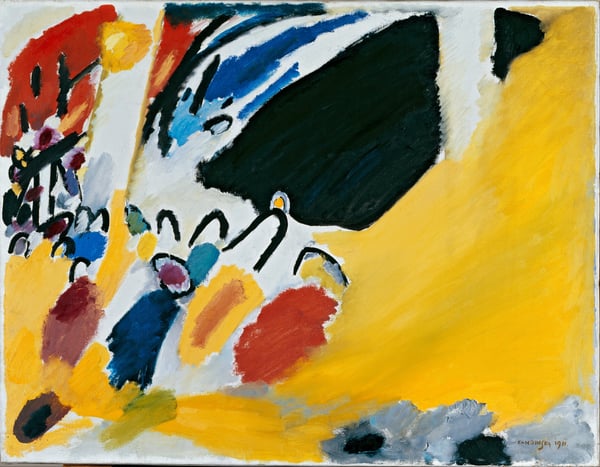 In January of 1911, Kandinsky heard Schoenberg’s music for the first time and sent him an enthusiastic letter: “What we are striving for and our whole manner of thought and feeling have so much in common that I feel completely justified in expressing my empathy. In your works you have realized what I … have for so greatly longed for in music.”

After the concert, Kandinsky set to work on a painting of it: IMPRESSION III – CONCERT. Here,  Kandinsky begins his own journey into abstraction…we can recognize the audience leaning in to listen, the black slab of the piano, but all is subsumed into a picture not of an event but of an experience. In much the same way, Schoenberg began to see how he could, and how he must, leave the traditional ways of Western musical representation behind and forge a new aesthetic, a new way of hearing, a plunge into hitherto unexplored depths of the soul. 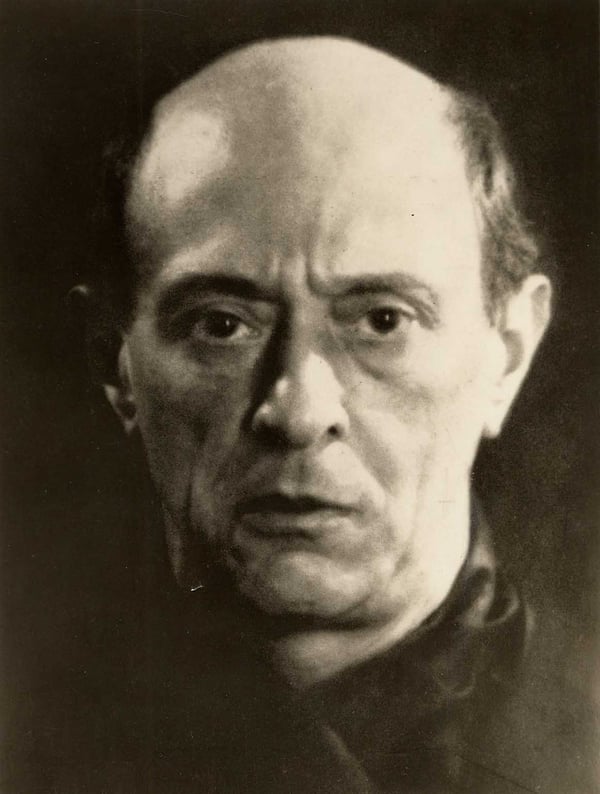 The Gaze
“ The immensities behind his eyes.”
- S. N. Behrman

“ When Schoenberg looked at you, you disappeared.”
- Igor Stravinsky