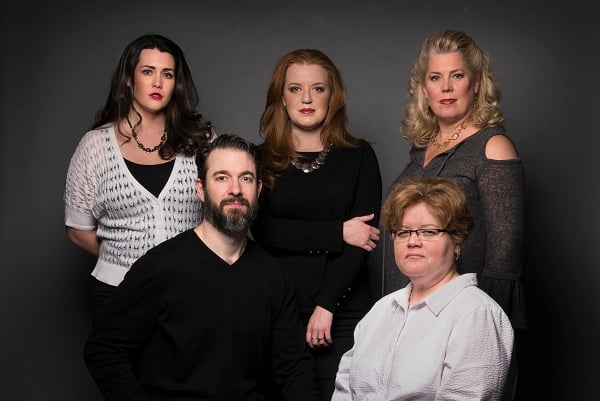 Soprano Caroline Worra met mezzo-soprano Maria Zifchak in 1998. Both had been chosen for the Merola Program, the San Francisco Opera’s prestigious institute for advanced operatic training; the two of them also appeared in the Western Opera Theatre touring production of Verdi’s La Traviata. They have remained friends ever since, and at one point Worra rented a first-floor apartment in Zifchak’s house in the Bronx. But they have never been onstage together since until Boston Lyric Opera engaged both of them for its forthcoming production of Poul Ruders’ operatic adaptation of Margaret Atwood’s cautionary dystopian novel, The Handmaid’s Tale.

Atwood published her book in 1985; it became a best-seller and eventually a classic – and a highly controversial one, after it began to appear on college and high school reading lists. The subsequent 34 years have brought a movie, several stage adaptations, an opera, a graphic novel, and a ballet, and recently Hulu produced an award-winning TV series. Atwood herself worked or advised on some of these projects, and now, after a long interval, has produced a sequel which will appear in September.

The world premiere of the opera took place in Copenhagen in 2000 – Ruders is Danish – and it has since been performed in London and in Minneapolis. BLO presents the premiere of a revised version – the composer has reduced and adjusted the orchestration and, with permission, BLO has removed the frame which the opera took from the one Atwood devised for her book, a conference years in the future in which a scholar examines the origin of the Handmaid’s story and its characters.

The action takes place in some future time when environmental and political crises and conditions have led to the dissolution of the United States government. Parts of New England have become a male-dominated, rigidly codified, and extremely conservative theocracy, called Gilead. Geographically, Gilead has much in common with Boston and Cambridge, where Atwood herself was a graduate student back in the 1960s, and it was enterprising for BLO to find a venue at Harvard University quite near to where the events of the novel and opera take place – the Ray Lavietes Pavilion is close to the Harvard Stadium, which is where Gilead holds its Prayvaganza, a large prayer event, in the book used to celebrate a mass wedding.

In Gilead, women are grouped into categories which are ruthlessly regimented; all of the categories exist to serve men. The Handmaids are a particularly and biologically select group; they are the small minority that is still fertile. Their only job is to produce children who will prolong the race and the nation. All in all, Gilead is a very strange but awfully familiar environment. Atwood likes to say she didn’t invent much; she simply reconfigured attitudes, beliefs, procedures and behaviors that were already in place or have happened throughout history. At the same time she was prescient – in 1985 she was already signaling governmental decisions to blame catastrophes on Islamic terrorists. Too much of The Handmaid’s Tale has become even more true in our own time.

The principal Handmaid is Offred, a highly observant, independent, articulate and sensitive modern woman who is old enough to remember her life in a pre-Gilead world; she is smart enough to keep her mouth shut but not smart enough to avoid illegal behavior. She used to be somebody and that somebody keeps popping out.

Worra’s role is Aunt Lydia – the Aunts are a corps of women charged with training, protecting and guarding the Handmaids; they arm themselves with cattle prods. Zifchak plays the infertile Wife of a Commander. She lives a life of empty and bitter luxury. In pre-Gilead days she was a gospel singer on television whose name, ironically, was Serena Joy.

Last week, Worra and Zifchak took an hour off from rehearsal – the production was taking shape in an off-season ice rink near North Station. The interview needed to move away from the rehearsal area – we could hear a ringing bass voice and see director Anne Bogart vigorously darting around. So the conversation took place in the women’s locker room at the rink – perhaps an appropriate venue for discussing an opera about the rigors of being women in a male world. There were lockers along the walls, but the room was otherwise empty except for an electronic keyboard and a few chairs. The two women seemed entirely at ease with each other, like the longtime friends they are.

In preparation for her role, Worra first read the book, then watched the Hulu series; Zifchak did it the other way around. Both of them seemed to like the opera, which is structured into a series of 32 short contrasting scenes. “Each of them establishes something different about the situation until there is a plot,” Zifchak says. “The audience will be on three sides of the space, and people on two of the sides will be seated on the basketball bleachers. This presents a challenge for the director and for us because we need to communicate fully with the part of the public that won’t all be able to see our faces at any given moment. It is a huge space, with is great for the big epic scenes that need it. But we will have to bring it down for the intimate scenes. There will be moveable set pieces and projections that help change the atmosphere. Also supertitles to help the audience with the text. Paul Bentley wrote the libretto in English, and the composer translated it into Danish for the first production and the commercial recording. The text is very manageable to sing – the composer set in a way that is syllabically correct.”

There are vocal and musical challenges in both roles, but each singer admits that Offred, sung by mezzo-soprano Jennifer Johnson Cano, has the most difficult part because she is onstage for every single moment. “Caroline’s part is hard as hell too,” Zifchak says, “because it lies so high in the voice.” “All of it stays above the staff,” Worra says, “which fine because my voice likes to stay up there. Aunt Lydia has a harsh personality, so it fits that the vocal writing is penetrating and edgy, and there is a lot of text because she is always lecturing everyone else. She does have a softer mom 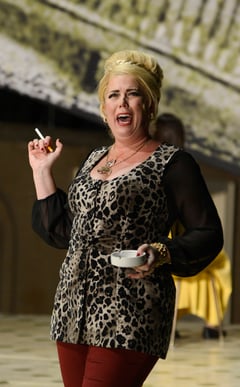 ent when she delivers a baby – and then painfully needs to turn it over to the mother.” “No rest for you at all,” says Zifchak, who at one point gets to sing ‘Amazing Grace’ as Serena Joy recalls her past as a performer.

Worra and Zifchak have had very different, even complementary, career trajectories. Worra is tall, blonde and striking, and her speaking voice is both clear and penetrating; she looks like an opera singer. She has sung close to 90 roles so far, sometimes multiple roles in the same opera. The diversity of her repertory can be gauged by her appearances with BLO – she has sung in Handel’s Agrippina, Mozart’s Idomeneo and Così Fan Tutte, Mark Anthony Turnage’s Greek, and in Beeson’s Lizzie Borden. Over 20 of her roles have been in contemporary operas, an interest that goes back to her studies at Indiana University where her teacher was the American coloratura Costanza Cuccaro, who is married to the composer Edwin Penhorwood; it was he who led Worra into new music. She says she loves working with composers and librettists. Yet after all of this, she is still capable of singing Violetta in La Traviata and still does. 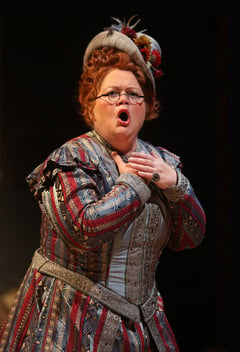 In another life Zifchak might have flourished as a secret agent; her face is expressively mobile and she can disappear into a role that is not herself. At the Cincinnati Conservatory she studied the music business and was working in a music store in Pittsburgh when she started voice lessons. Before long she became a winner of the Metropolitan Opera National Council Auditions (the same year as Boston-trained baritone Keith Phares) and went straight to the Met. By now she is coming up on 500 hundred performances there, mostly in supporting roles in which she is noted for instantly creating an indelible impression. She has also sung a few larger roles with the company: Dorabella in Così Fan Tutte, for example, Magdalene in Die Meistersinger, and her specialty, Suzuki in Madama Butterfly, a part she has sung close to 100 times. Rudely asked if she had ever made a musical error as Suzuki, she replied, “Not that I know of – but I did once trip over Catherine Malfitano, who was emoting on the floor! But I think she was one of the best Butterflies I ever worked with, and to perform with her was a privilege.” Outside the Met, when she is free, she has sung parts as diverse as the title role in Rossini’s Cenerentola, Mrs. Lovett in Sweeney Todd, and the Mother Abbess in The Sound of Music.

The singers agree that The Handmaid’s Tale is a harrowingly intimate story, but the scale of the opera is enormous. They point out that the orchestra is large (and loud) and that there are close to 40 singers in the chorus. “The audience will be drawn into the story –and not just because many of them are probably already familiar with it,” Zifchak says. "The musical idiom is eclectic and contemporary, and the opera an extremely intense drama involving just a few people into the context of a whole society that is complex and in conflict." Just as Verdi’s Aida does!