Looking Back on Werther: Feedback and Reviews 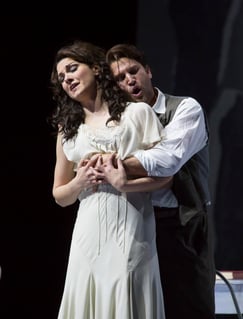 “I enjoyed it tremendously and would like to say that the vocals that were displayed were fabulous and were perfectly blended. I took away from the performance a bucket load more respect for opera vocalist[s] and vocalist[s] in general.” – High School Student

“I went to the opera thinking that I would not like it very much. I have seen an opera before at Tanglewood and I did not enjoy it very much. However, I was pleasantly surprised! The opera was visually stunning! I loved the modern art in conjunction with the old fashioned costumes and setting was ingenious. I loved it! My favorite scenes include the scene where the red blood dripped down the wall and where Charlotte was projected onto the wall. … My opinion of opera has drastically changed. I thought the opera was visually stunning! The story was heartfelt and enthralling!”
– High School Student

“I thought the plot was very interesting and the set was complex and thought-provoking and really emphasized the conflict between characters and how they affect one another. The singers were strong and clearly expressed the emotions that come with love. I enjoyed the performance and I thank you for putting in so much effort to put on the awesome show!” – High School Student 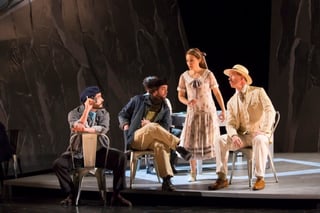 “I truly enjoyed my opera experience, and I recommend that
everybody go to a professionally done opera at least once in their life. It is
truly breathtaking to hear the performers and also the orchestra. You can tell
that it takes a great skill to do either one of those. Even though I was blown
away by the performance, it is important to note that it was not overwhelming
to experience. The set was simple, yet brilliant.” – High School Student

“A thrilling experience… It helps to have such great acting singers such as Alex Richardson in the title role, and the beautifully-voiced Sandra Piques Eddy.” – South Shore Critic