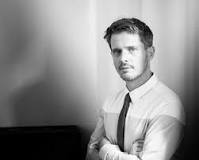 In a 2018 interview, composer Gregory Spears explained that he was drawn to the subject matter of Fellow Travelers because he “really wanted to write an opera about ordinary people,” and he “liked that the central characters weren’t historical figures.” This seemingly simple juxtaposition—ordinary people versus historical figures—raises complex questions. Who gets to be an operatic subject? What kind of stories is the art form best equipped to tell? Can opera make the ordinary extraordinary?

There is no shortage in opera of powerful kings, queens, pharaohs, and emperors, both real and imagined. But the genre’s capacious range also encompasses plenty of apparently unremarkable figures. They tend to show up in realist works: think of the apartment dwelling artists in La Bohème, or the factory workers in Carmen. These are the types of people who, broadly speaking, might otherwise be lost to history. But by elevating them to a place of prominence, the genre offers a different—and potentially transformative—historical narrative. Through opera’s combination of dramatic narrative and musical complexity, ordinary people might be heard and remembered, singing their way into our ears, our consciousness, and our collective memory. 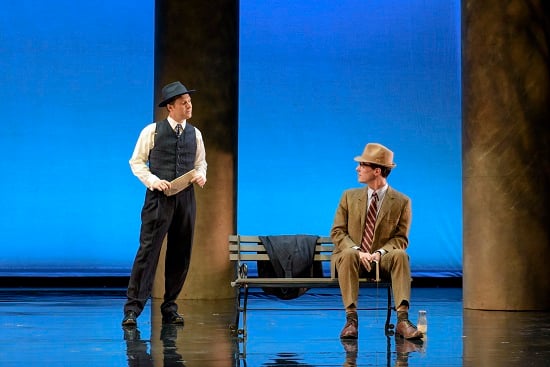 Hawkins “Hawk” Fuller and Timothy Laughlin are the two regular men at the heart of Fellow Travelers, which is based on Thomas Mallon’s novel of the same name. A State Department bureaucrat and a young aspiring politician, respectively, they are caught up in a love affair after meeting in a Washington, D.C. park. All normal enough—yet the times in which they live insist otherwise. Forces beyond their control interfere: namely the Lavender Scare, the mass purging of gay people from U.S. government jobs during the panic-ridden McCarthy era.

Many gay people had lived openly during earlier moments in U.S. history, especially in urban areas like New York City and Washington, D.C., but around the middle of the century they were pushed into the closet. The Lavender Scare put the force of state power behind this cultural shift, allowing the government to intervene in citizens’ private and professional lives, and drive them out of the federal workforce. It was interwoven with the anticommunist Red Scare of the same era. Communism and homosexuality were often conflated in popular discourse as similarly subversive, threatening, godless and antithetical to national values. 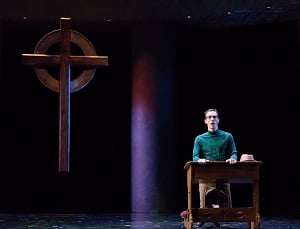 Under these circumstances, Hawk and Timothy cannot be ordinary men pursuing an ordinary relationship; instead, they are marked baselessly as a national threat. The men are forced underground, hiding their affair under a quilt of codes, subtexts, and denials. Their relationship unfolds in a bifurcated array of locations: a public landscape of parks, offices, and interrogation rooms, as well as a private realm of apartments, kitchens and homes. Timothy, especially anguished, seeks solace in other institutional spaces, from the cavernous sanctuary of a Catholic church to the regimented confines of the U.S. Army. Hawk decides marriage and a house in the suburbs is the preferable option. But neither is willing to abandon the relationship entirely.

As the story unfolds, audience members necessarily find themselves in an odd position. The line between surveillance and spectatorship blurs as we become privy to the men’s—especially Timothy’s—innermost thoughts and hidden moments, able to witness precisely what they are trying to hide.

The music of Fellow Travelers keeps this paradox at the forefront of the opera. Spears’ music is more intimate than grand, seeking to entice rather than merely to impress. Quasi-Baroque ornamentation and minimalistic repetition toward the beginning of the opera foster a sense of familiarity, inviting listeners to search for details. Reinforcing this sense of normalcy, the libretto relies upon plainspoken language that unfolds in speech-like patterns (although there are a few plaintive, lyrical exceptions).

At the same time, the opera’s music is never simple. Multiple musical ideas appear at once, resulting in stylistic collisions: a cool ostinato, for example, thrumming below a vibrantly romantic melody. This musical evocation of text and subtext might be interpreted in several ways. In one sense, it is a reminder that people’s lives are often more complex than they initially appear— a charged notion in a context of persecution, where the wrong word or behavior might render one a victim. In another, this musical interplay allows the opera to represent its characters’ interiority and psychology more powerfully. Spears has explained, “I try to avoid writing music that tells a listener what to feel or music that directly represents or underlines a character’s feelings from moment to moment.” Instead, indirection becomes the predominant musical strategy. As textures and tensions accumulate in the score, the traditional boundary between action and emotion collapses in favor of a multilayered, ambiguous sound. 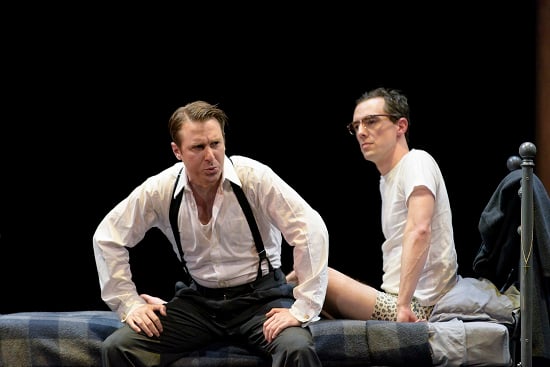 Ultimately, the opera raises the question of what it means to be a “historical figure,” to return to Spears’ term. Some accounts of the past refer to ordinary people,  specially marginalized people, as “voiceless,” due to their relative absence from records of public and civic life. But others have critiqued that formulation: these people were never without a voice; they were willfully unheard or silenced. Fellow Travelers makes that fact plain. Even as gay people were silenced within the context of public life, men like Hawk and Timothy defiantly continued to speak, sing, and express their thoughts. Yet their ability to do so does not mean that they emerge from the Lavender Scare unscathed. Instead, the opera reveals the harmful consequences that Hawk and Timothy ultimately face. As they struggle to navigate a landscape of persecution and danger, their relationship falters, fractures, and falls apart.

It bears remembering, though, that in the not-so-long-ago era in which Fellow Travelers takes place, an opera about gay life would have been a virtual impossibility. That is no longer the case. An abundant array of recent works—Terence Blanchard’s Champion (2013), about gay black boxer Emile Griffith; Peter Eötvös’ adaptation of Tony Kushner’s play about the AIDS crisis, Angels in America (2012); and Iain Bell’s Stonewall (2019), about the monumental uprising that catalyzed the gay rights movement— creates a panoramic historical landscape. Like Fellow Travelers, these operas exemplify one element of opera’s enduring power: its ability to engage in historical storytelling, to illuminate even the most ordinary facets of the past in extraordinary ways.

Tim speaks to God after his first night with Hawk Photo by: Liza Voll

Hawk and Tim sit in bed together. Photo by: Liza Voll