Powerful and Personal: Rothstein on the People in Fellow Travelers

Tragedies abound in opera, but the tragic story in Fellow Travelers is unique.  A love story between two men during the McCarthy era, it tells of a complicated illicit relationship and the persecution that impacted it. 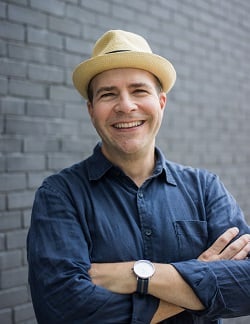 "It's the most powerful and personal story I've told in opera," says Peter Rothstein, the stage director who brings his acclaimed 2018 Minnesota Opera production to Boston. "Just representing gay characters in opera as three-dimensional human beings, and telling their stories, is revolutionary."

Adapted from the 2007 novel of the same name by Thomas Mallon, Fellow Travelers is both intimate and grand, a mix perfectly suited for opera, Rothstein says.  The emotive score by composer Gregory Spears, with its long orchestral passages, expresses the personal and political passions that propel the opera.

And the conversational text by librettist Greg Pierce reveal Tim and Hawk as ordinary individuals trying to find their way during an extraordinary time, Rothstein says. "When parts of the libretto feel unpoetic and naturalistic, it's because Tim and Hawk are finding a language for what has been unspoken; they’re trying to articulate a queer love that hasn't been expressed before.”

In the story, both Timothy Laughlin, a young aspiring journalist who is sexually inexperienced, and Hawkins Fuller, a middle-aged state department official who has had multiple relationships, are victims of the Lavender Scare in the 1950s.  At a time when most people hid their homosexuality, Senator Joseph McCarthy and his supporters targeted not just people they accused of Communist loyalties, but also gay men and lesbian women. Thousands lost their jobs under the pretext that they threatened democracy because their need to be secretive made them vulnerable to blackmail.

"The characters are specific, complex individuals in a situation that is epic," Rothstein says. "The McCarthy witch hunts were out of control -- that kind of situation can't help but impact the psyche of its victims and its perpetrators." 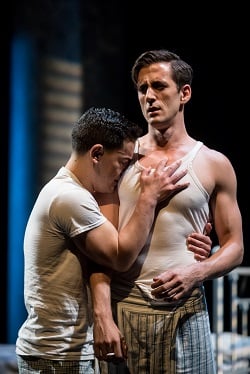 At the start of the opera, Hawk joins Tim on a park bench.  Their attraction leads to an affair, as well as a career opportunity for Tim after Hawk recommends him for a speechwriting job, ironically for a senator who supports McCarthy’s cynical policies.  As their relationship unfolds, their differing expectations create tension.  Tim imagines life with Hawk in a committed relationship, while Hawk pursues liaisons on the side and eventually marries a woman.  Over 16 scenes and two 50-minute acts, attraction and conflict are followed by separation, reunion and finally betrayal.

"It's a coming-of-age story for Tim who was raised in a strong Catholic family and comes out of the closet," Rothstein says. "Hawk is experienced at navigating gay relationships and is an expert on wearing a mask."

The opera has personal meaning for Rothstein, who came out of the closet late in life.  He says people of any sexual orientation can relate to the story’s issues of trust, commitment and power.  "It's unique, in that that they're affected by a homophobic culture, but their relationship is universal," Rothstein said.

Rothstein says this production, unlike previous iterations, brings to the forefront Hawk's tragedy, which can sometimes be overshadowed by Tim’s narrative arc.  "Audiences ally with Tim because of his loss of innocence, but in some ways Hawk's narrative is equally tragic," Rothstein says. "The question is how do we empathize with people who don't make virtuous decisions? Hawk is trying to live an authentic life in a world that denies him that opportunity. I think Hawk's love for Tim is as great as Tim's for Hawk, but it frightens him. Tim is a romantic and believes love will win.  Hawk sees that in the Lavender Scare, love doesn't win."

Rothstein says perhaps the only hero of the opera is Mary, a government secretary who works for Hawk and voluntarily leaves her government job.

"She doesn't want to remain working for a government that functions on fear and hatred," he says. "Hawk and Tim don't really have a choice, but Mary stands on principle." In contrast to Mary, Miss Lightfoot, another government employee, is homophobic and doesn't see what’s at stake for Tim and Hawk.

And though Senator McCarthy has only a short time on stage, his presence is pervasive. "Part of the narrative arc is Tim seeing McCarthyism in a new light," Rothstein says. "The big centerpiece aria is by Tim -- in church confronting his awakened sexual self in contradiction to his religious upbringing. McCarthy is at the center of it as Tim, who had been a McCarthy supporter, navigates a change in ideologies."

Although an opera doesn't need to resonate with the present to be powerful, Fellow Travelers clearly does. "Homophobia and xenophobia is on the rise and in the last couple of years, it feels like we're moving backward as a society," Rothstein says. "My ultimate goal is to ask the audience to see how a society that doesn't allow people to live their authentic lives has to take some responsibility for the individuals it creates."

Peter Rothstein will be directing this production of Fellow Travelers.

Hadleigh Adams and Andres Acosta share a tense moment while performing as Tim and Hawk at Minnesota Opera's 2018 production of Fellow Travelers.

Hadleigh Adams and Andres Acosta kiss during the Christmas party scene while performing as Tim and Hawk at Minnesota Opera's 2018 production of Fellow Travelers.