THE HANDMAID’S TALE
Music by POUL RUDERS | Libretto by PAUL BENTLEY | Based on the novel by MARGARET ATWOOD
First performances of a new edition by the composer, commissioned by Boston Lyric Opera
Sung in English with English surtitles
Length: Approximately 3 hours, with one intermission

WORLD PREMIERE
The Handmaid’s Tale was written by composer Poul Ruders and librettist Paul Bentley in English, based on Atwood’s canonical novel, but had its World Premiere in a translation by the composer at the Royal Danish Opera, Copenhagen, on March 6, 2000. The production then transferred to English National Opera in 2003, marking its English-language premiere.

BLO’s production will be only the third time the work has been produced by a major North American company. The first was Minnesota Opera’s U.S. premiere in 2003, and in 2004 the Danish Royal Opera production transferred to Toronto, Canada—Atwood’s hometown.

FORCES
The Handmaid’s Tale is an epic undertaking. For our production, BLO has commissioned Ruders to create a new edition of the opera, bringing our expected orchestra size to approximately 65 players, with a chorus of about 34 singers.

The Handmaid’s Tale, published in 1985, is set in and around Cambridge, drawing on Margaret Atwood’s own experiences as a graduate student at Radcliffe in the early 1960s, as well as world events in the late ’70s and early ’80s and the rise of the Christian Right in the U.S. Writing in The Guardian in 2003, Atwood mused:

“What inspired The Handmaid’s Tale?” I’ve often been asked. General observation, I might have said. Poking my nose into books. Reading newspapers. World history. One of my rules was that I couldn’t put anything into the novel that human beings hadn’t actually done.

Atwood had traveled with her husband to Afghanistan in 1978, and her papers (which are archived at the University of Toronto) include newspaper clippings from the time on subjects such as the Iranian Revolution, environmental pollution, cults, and fears of growing infertility and sexual engineering. She also noted her fascination with Puritan New England and the Salem witch trials: “It’s no accident that The Handmaid’s Tale is set in Massachusetts.”

So there is a special resonance as BLO brings the opera to life through an installation at the Lavietes Pavilion at Harvard University. Now a basketball stadium, Lavietes first opened in 1926 as the Briggs Center (a.k.a. the “Briggs Cage”) and housed Harvard’s indoor track teams. Basketball became the center’s main sport in the early 1980s, and the building went through a recent extensive renovation, reopening in 2017.

Atwood may have even had Lavietes in mind as she was writing; the first line of the novel pulls the reader into a dystopian world where the familiar has been rendered strange, reading, “We slept in what had once been the gymnasium.” 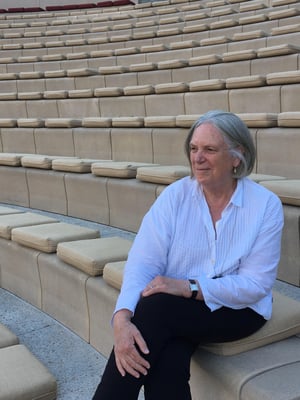 Anne Bogart will join the BLO creative team at the helm of The Handmaid’s Tale, as stage director. A renowned theater and opera director, Bogart co-founded the SITI Company in Saratoga Springs, NY, with director Tadashi Suzuki in 1992. She is well-known for developing the Viewpoints Method, based on the work of choreographer Mary Overlie in the 1970s. Rather than beginning with emotions or personal memories (as in “Method Acting” or Stanislavsky-based acting approaches), Viewpoints is a movement-based technique that trains actors to find truthful characters and emotion through gestures, physical awareness and surroundings, and improvisation. Bogart’s theories are widely regarded and taught in conservatories throughout the country; she herself teaches at Columbia University. In addition to her work at dozens of top theaters, she has directed operas at Washington National Opera, Glimmerglass Opera, Los Angeles Opera, and more.