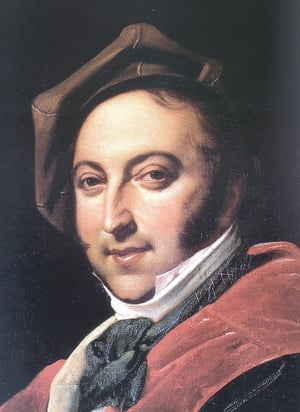 In January, 1816, Gioacchino Rossini was up against a wall, and the person who put him there was himself.

At the end of 1815, the composer was in Rome for the premiere of his opera Torvaldo e Dorliska which opened the day after Christmas. In the midst of the rehearsals and performances, the director of Rome’s Teatro Argentina asked him on very short notice to compose a new opera for carnival season in February.

Rossini was almost 27 years old at that point and already had 16 operas behind him—he composed his first at the age of 17, and some of its successors were already out making their way on the international circuit. Composing a new opera in a hurry seemed as if it would be no problem; he’d done it before.

What was a problem was finding a subject. He had enjoyed working with the librettist Cesare Sterbini on Torvaldo e Dorliska, and it was Sterbini who suggested basing the new opera on The Barber of Seville, a famous, 40-year-old play by the French playwright Pierre de Beaumarchais.

Today, Beaumarchais is best known for two operas drawn from his trilogy of plays about Figaro, a lively barber/surgeon/valet/general factotum who enjoys outwitting his social superiors—a characteristic that would, in time, turn him into a revolutionary. Beaumarchais was not primarily a writer; he was as versatile and energetic as Figaro, and at different times was active as a watchmaker, musician, inventor, publisher, money man, diplomat, spy, arms dealer, supporter of the French  Revolution and the American Revolutionary War. Figaro is many things, but maybe most of all, he is a self-portrait of Beaumarchais, a man who (as Figaro says of himself) would rather laugh than weep. Beaumarchais’ theatrical masterpieces move as smoothly and accurately as superb clockwork, and the best lines chime.

Rossini was attracted to Sterbini’s idea, probably because the opera of the past he loved best and learned the most from was Mozart’s The Marriage of Figaro. But he hesitated because he did not want to offend Giovanni Paisiello, a distinguished composer then in his mid-70s who had written a successful Barber of Seville back in 1781. Rossini even wrote to Paisiello, promising to dispel any potential confusion by entitling his own opera Almaviva, or The Useless Precaution, which he did—it wasn’t until after Paisiello’s death that Rossini’s masterpiece inherited the Barber title.

Sterbini quickly cobbled a new libretto together, and Rossini began to compose. He later boasted that he had composed The Barber of Seville in 13 days. Donizetti, Rossini’s younger colleague who was even more prolific, joked that after all Rossini did have a reputation as a “lazy” composer.

To be fair, Rossini did cheat a little—he didn’t have time to compose a new overture. So he simply recycled one he had already used for two previous operas—operas on serious subjects. In one respect, the overture is a curiosity because it does not anticipate or refer to any of the later music in the opera. On the other hand, no audience for The Barber of Seville has ever complained about the overture, which is so effervescent that it makes a perfect fit.

The opening night was a notorious disaster—the original Rosina, a contralto named Geltrude Rigetti-Georgi, left an account of it. The opera had been hastily prepared and nothing was quite ready; also a stray cat wandered into the stage action. The audience was full of disgruntled admirers of Paisiello’s opera who did not want Rossini’s version to succeed, and saw to it that it didn’t. Rossini didn’t even bother to attend the second performance. But it was a triumph, and the new history of The Barber of Seville began. Rossini may have composed it in 13 days, but it has been running—and selling out houses—for 202 years now.

What the opera boasts is a delightful plot, a lot of musical jokes that mirror the stage action, an unending wellspring of ever-fresh melody, ingenious orchestration (listen for the piccolo, which is like
the sun kissing ripples of water). Ever since Beethoven’s musical storm in the “Pastoral” Symphony, other composers have tried to out-storm him. No one has really succeeded, but Rossini came close in The Barber of Seville, and closer still in the last overture he ever wrote, for his final opera William Tell. Rossini met Beethoven once, and the older composer was apparently jealous that the younger composer had taken Vienna by storm. He told Rossini that his gift was for comic operas and that he should write “more Barber,” with the strong unspoken suggestion that he shouldn’t try to compose a symphony!

The music in Barber arises from character and situation. Each of the figures is drawn from commedia dell’arte stock—the doddering old fool chasing a younger woman; the scheming, rapacious music teacher; the ardent lover who is an aristocrat disguised as a student and a drunken soldier; the quick-witted barber who meets his match in the quicker-witted heroine. Even the servant Berta gets her moment in the spotlight to deliver the moral of the tale. But none of the characters is completely stock—they have the ability to surprise each other, themselves, and the audience.

Stage director Rosetta Cucchi, returning for her third BLO production, calls Figaro the “James Dean” character. He is a rebel who doesn’t yet have a cause, although he will find it in Mozart’s The Marriage of Figaro, which she has already staged here. In Rossini’s opera, Figaro already treats his social superiors as his equals, and Cucchi wants Figaro as well as the Count and Rosina to have latent within them what they will later become. “Without Figaro,” she said in a production meeting last summer, “the opera is just an amusing but conventional love story played as a game or a farce. Figaro makes it something else.” The stage design, by Julia Noulin-Mérat, is inspired by the whimsical impossibilities and clockwork tessellations of the art of M. C. Escher, while the costumes, by Gianluca Falaschi, mingle games motifs and patterns with sumptuous period silhouettes. 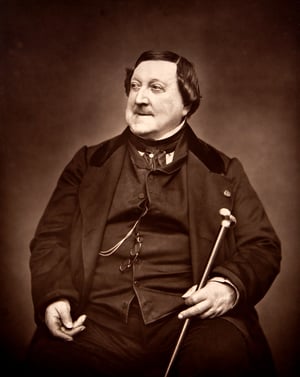 There are duets, trios and other intricate ensembles as well as major arias for everyone, several of which have entered into popular culture—most of all Figaro’s bravura entrance aria “Largo al factotum,” known to more recent generations from the performance by the wascally wabbit himself, Bugs Bunny. This aria provides an example of one of Rossini’s most characteristic musical effects, the so-called “Rossini crescendo,” which is never a matter of simply getting louder—the orchestration adds instruments, while the music changes in register and reach as it gets faster and faster. The best example comes in the aria for the music master, Don Basilio, which traces the development of rumor into scandal as a whisper turns into gossip and ultimately a serious threat with the whack of the bass drum.

After Barber, Rossini composed about 20 more operas before he retired at age 37 for the life of a bon vivant who loved to cook, eat, and admire beautiful women. With part of his fortune, he created a Rossini Foundation which still exists, and which in recent decades has done much to restore many of the composer’s long-forgotten other operas, particularly the serious ones, to life. Daniela Mack, a leading young mezzo-soprano who has already sung Rosina in San Francisco and in the Royal Opera, Covent Garden in London, will perform in Rossini’s original keys, some of which have traditionally been lifted to accommodate coloratura sopranos.

In old age, Rossini composed some charming songs, chamber music, and piano pieces that he called the “sins of his old age.” Asked which of his works were his favorites and most likely to survive, he replied, “The third act of Otello, the second act of William Tell, and all of The Barber of Seville.” Verdi ratified this when he wrote, “I can’t help thinking that for abundance of real musical ideas, for comic verve, and for truthful declamation, The Barber of Seville is the finest opera buffa in existence.”

This article was written as part of the Barber of Seville program book.