The Legend of Lucretia: Exploring an Archetype 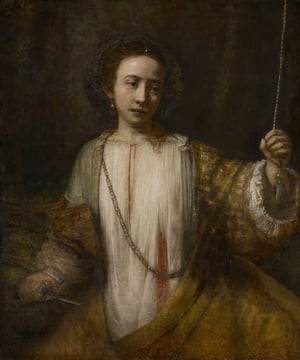 The story of Lucretia encompasses a brutal sexual attack, the tragic and devastating personal action that follows it, and the momentous political events that subsequently arise from it—a relatively straightforward narrative sequence. But the complex ambiguities and the disturbing moral and psychological interpretations that lie below the surface have long fascinated writers, painters, composers, and philosophers. And, of course, it is to be discouragingly (but crucially) noted that, for the most part, these are male viewpoints. As we anticipate the new BLO production of Benjamin Britten’s The Rape of Lucretia, we examine some of the various accounts of this…legend? myth? moral fable?...as well as touch on its origin as historical actuality.

The basic story: Rome is under foreign rule by an Etruscan dynasty. The king’s son, Tarquinius, is leading a joint army in an expedition against Greece. Aroused by stories of the virtuous chastity of the Roman matron Lucretia, wife his general Collatinus, Tarquinius rapes her. She, in the presence of her husband, commits suicide, and another general, Junius Brutus, uses her ravishment and self-sacrifice as a rallying cry against the Etruscans. A popular uprising drives the occupiers from Rome, abolishing the monarchy and leading to the founding of the Roman Republic. 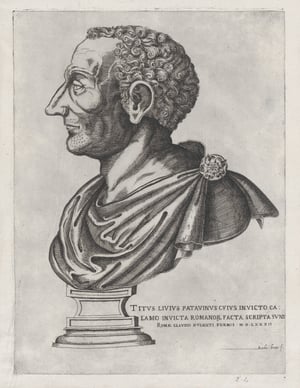 The main classical account seems to derive from sources that exist only in fragments. The important surviving accounts are from the historian Livy (in his The History of Rome, written between 27 and 9 BC), from the poet Ovid (published a few years later), and Plutarch (a century or so later still). Possibly the story grew out of actual events and characters, but certainly it was shaped by the passage of time, coming to incorporate elements of fiction and the propaganda-driven modification of historical truth. As articulated by Donaldson (see below), the story of Lucretia was “…fashioned into a political myth to rehearse and explain…certain fundamental Roman ideals [about]…public and private behavior… [and] the nature of liberty. …Brutus achieves political liberty for Rome as Lucretia by her suicide achieves personal liberty. Lucretia is not simply herself but the figure of violated Rome…the rape epitomizes the wider tyranny of the Tarquins.”

The early Fathers of the Christian Church did not oppose the pagan notion that a woman’s honor (and chastity) is a treasure more precious than life, or that life should be laid down in order to save this treasure…or atone for its loss. “The very high value placed on virginity made female martyrdom a subject of particular interest to the church” (Donaldson). But Saint Augustine in The City of God (413 AD) renewed skeptical questions about the problems of Lucretia’s suicide that have reverberated in all subsequent commentary and controversy. In the beginning (from Livy’s account), Lucretia stated the issue: “My body only has been violated…my heart is innocent: death will be my witness.” Augustine adds, “There is no possible way out…if she is adulterous in spirit, why is she praised? If she is chaste and guiltless in spirit, why does she kill herself?” While ancient Romans had cast Lucretia as the ultimate sacrifice in the face of tyranny, Augustine cast doubt on Lucretia’s celebrated virtue, implying that her suicide in some way proved her complicity in her own rape. As odious as this false equivalence seems today, however, it also opened up a way for Christian women to regain their lost honor after an assault—if moral purity was an inner quality of the soul, suicide was an unnecessary and counterproductive way to restore it.

Shakespeare’s long narrative poem “The Rape of Lucrece” is an early work written in 1594 (and thus more or less contemporaneous with Romeo and Juliet and The Taming of the Shrew, two quite different studies of the power and violence of sexual dynamics). It was one of Shakespeare’s first great successes but has been overshadowed by his second long poem, the more masterfully composed “Venus and Adonis,” which was written the following year. Shakespeare’s telling of the Lucretia story contains sequences of compelling psychological insight and narrative vigor. He dwells at some length on Tarquinius’ ambivalent, even tortured, feelings towards the crime he feels driven to commit before he eventually accepts and embraces his course of violence. At even greater length, Shakespeare explores the complex reaction of Lucretia and, with his usual insight and poetic force, dramatizes her desperate attempt to understand what has happened. “No other version of the Lucretia story explores more minutely or with greater psychological insight the mental processes of the two major characters, their inconsistent waverings to and fro, before they bring themselves finally, and reluctantly, to action.” 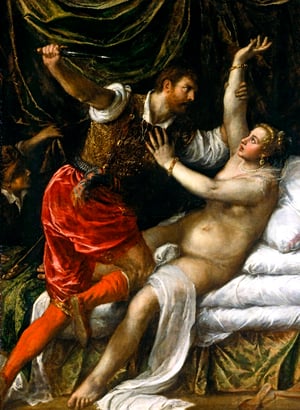 onses (serious and even sometimes humorously), “reversing its traditional narrative outlines and moral assumptions in an attempt to make it more comprehensible or acceptable.” In Madeleine de Scudery’s (a rare woman’s response) romance Celine (1654), Lucretia shows indifference, even hostility, towards her
husband and is in love with the dashing Lucius Junius Brutus. A.V. Arnault’s tragedy (1792) allows his heroine to harbor a lingering fondness for her rapist, a former suitor whose attentions had been proscribed by her father because of his connection to the hated Tarquinius family. In Rousseau’s unfinished play (1792), Tarquinius again is a former suitor once betrothed to Lucretia, and Collatinus an ambitious and contemptible figure who encourages Tarquinius to approach Lucretia to advance his own position at court. Parody, low comedy, disconcerting facetiousness often enter the picture. In Thomas Heywood’s play (1608), after the rape, a bawdy song is sung merrily reflecting on the event. “Unlike jokes about other crimes—murder, theft, incest—jokes about rape have a special quality: that it is legal and social fiction which will dissolve before the gaze of humor and the universal sexual appetite.” Pushkin’s Count Nulin (1852) is another example of this “modern” deflation of the legend. He wrote, “…re-reading LUCRECE, a rather weak poem by Shakespeare, I thought: what if it had occurred to Lucretia to slap Tarquin’s face? Maybe it would have cooled his boldness and he would have withdrawn covered in confusion.”

"The tragic versions of the myth tend to present Lucretia as a saint; the comic versions as a whore. The two views, equally dehumanizing in their different ways are perhaps not so radically opposed. Both are products of male thinking; both present women according to popular stereotype…veneration and contempt are often closely allied.”

Britten’s opera, with a libretto by Ronald Duncan freely adapted from the play by André Obey, Le Viol de Lucrece (1931), was written in 1946. His retelling of the story is set within a Christian context where the meaning of Lucretia’s suicide/sacrifice is linked to the martyrdom of Christ…a context and comparison that had been proposed as the pagan myths of Rome encountered the newly Christianized Europe. This framework has been and continues to be a controversial and much criticized aspect of Britten and Duncan’s work, and is but another example of the richly dense, ambiguous and important questions that the story of Lucretia has engendered.

Note: The quotations and much of the material in this very brief overview of a very complicated story are taken from The Rapes of Lucretia: A Myth and Its Transformations by Ian Donaldson…a detailed, authoritative and eminently readable study, highly recommended by this author.