Boston Lyric Opera presents the World Premiere performances of Tod Machover’s Schoenberg in Hollywood on November 14, 16 and 17 at 7:30 PM and November 18 at 3 PM in the Emerson Paramount Center. 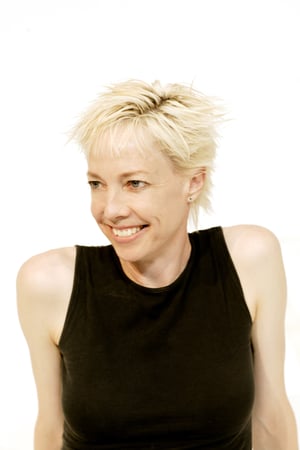 When crisis hit Boston Lyric Opera, Karole Armitage did not need to step forward as a first responder – she was already on the scene and involved in the Company’s forthcoming World Premiere production of Tod Machover’s Schoenberg in Hollywood.

In late July of 2018, Braham Murray, the distinguished British stage director, died suddenly and unexpectedly at the age of 75. Murray had been involved with Machover’s work for more than two decades and had directed the premieres of two of the composer’s previous operas, Resurrection and Skellig. More recently, he had created the scenario for Schoenberg in Hollywood – he had worked out a plot and a structure from which Simon Robson had developed the libretto before Machover had composed the opera. And he was scheduled to direct the World Premiere performances for BLO in the Emerson Paramount Center.

Karole Armitage had also worked with Machover before. A few years ago, her Armitage Gone! Dance Company had given a performance at the Concord Academy which Machover attended. He was so struck by what he saw and experienced that he invited the choreographer to lunch the next day and asked her to join the production team for his opera Death and the Powers. These days, Armitage doesn’t remember her exact title on that project, but it was probably “movement coordinator,” and her responsibilities included choreographing the robots that were principals in the production at the American Repertory Theater back in 2010. “Imagine trying to create convincing choreography for robots that didn’t always work the way they were supposed to, and had no fronts, no backs, and no sides!”

Machover was eager to have Armitage involved in his newest opera, and in fact she participated in filming the cast in certain episodes for the production last May – the filming took place in and around Machover’s home and barn in Waltham. The libretto calls for only three singers. The experienced and prominent British new-music baritone Omar Ebrahim takes the part of Schoenberg, and two younger singers – and recent alums of BLO’s Emerging Artists initiative – Sara Womble and Jesse Darden, appear all the supporting roles. This keeps Schoenberg in Hollywood on the scale of a chamber opera and builds on the examples of Offenbach’s The Tales of Hoffmann, Britten’s Death in Venice, and Thomas Ades’s Powder Her Face, in which singers appear in multiple roles. Womble will be a young American; a student of Schoenberg’s; his first wife, Mathilde; his second wife, Gertrud; and Harpo Marx. Darden will be the Hollywood mogul Irving Thalberg; the young Schoenberg; a Rabbi; Chico Marx; and such prominent composers in Schoenberg’s circle as Gustav Mahler, Alban Berg, and Anton von Webern. Ebrahim, as Schoenberg, will assume the personas of Humphrey Bogart and Groucho Marx as the libretto imagines Schoenberg’s life filtered through various film styles. Armitage was initially asked to develop body language and movement patterns with the singers that will help establish their many characters. And make them feel comfortable about dancing in the style of Fred Astaire and Ginger Rogers.

After Murray’s death, Machover and BLO asked Armitage to take charge of the entire production. She was initially reluctant, but soon decided to go for it. “I was looking forward so much to working with Braham, who was a brilliant man, and I was still in shock. But the more I thought about it, I realized I really did have some ideas about how to do it, and now that rehearsals are underway I am incredibly happy that I did finally say ‘yes.’ The piece is so full of wit and verve and depth, as it explores the human and political and personal and artistic character of Schoenberg. Tod’s music has woven the entire history of music into his own musical world and infused it also with popular culture. Molecules of the past keep pushing up into the present – that’s the way life is, isn’t it? And I really did want to keep working with his extraordinary cast – each of them can do anything I could possibly ask of them.”

Armitage brings a rich and diverse experience to everything she does. She began her professional career in 1973 when she danced leading roles in Balanchine ballets in the great choreographer’s second company in Switzerland. Her freshness and independence of mind and her close-cropped blonde hair were immediately striking, and it wasn’t long before fans dubbed her “The Punk Ballerina.” She then spent several years dancing in the avant-garde Merce Cunningham Dance Company before striking out on her own as a choreographer in New York and in Europe. Over her busy decades of activity as a choreographer, she has collaborated with prominent painters, visual artists and fashion designers, created dances for ballet troupes, and served as director of dance companies and festivals in Italy and in France. Additionally, she has staged operas as diverse as Gluck’s Orfeo ed Euridice and Philip Glass’s The Witches of Venice – not to mention staging a Cirque du Soleil show, creating evening-length dances about physics and climate change, choreographing videos for Madonna and Michael Jackson, and incorporating Native American dancing into a vocabulary that bridges ballet and modern dance.

Today Armitage is nearly as thin and erect, limber and lithe as she must have been 45 years ago, and she is completely present in everything she says and does; one is struck by her formidable intelligence, her strong opinions, her vast experience and comprehensive knowledge of world music, her pride in her work and her willingness to admit it when a project has not turned out the way she intended (“I think of it as a missed opportunity,” she says of one of them).

Armitage has spent her entire career re-inventing herself, and from Schoenberg in Hollywood she will move next to a Japanese Noh play. “I never sought to have a ‘career,’” she says. “Instead I always follow my curiosity and I’ve always been willing to try something no one else was doing.” She has changed the way people look at dance, think about it, feel it. She doesn’t want to compare herself to Schoenberg any more than Machover does, but both of them know how artists absorb and discard influences and experiences and emerge as themselves. 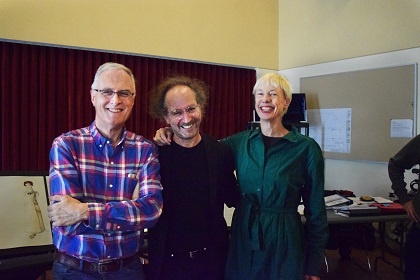 In an interview in a crowded storeroom in the Boston Center for the Arts during a lunch break from rehearsal, Armitage spoke enthusiastically about Schoenberg in Hollywood, which is a project that has been in Machover’s mind for decades. He was struck by the comedy of errors that arose between Schoenberg’s bedrock seriousness and austerity and the new world of movie studios, Klieg lights, and popular culture he found himself in after his escape from Hitler’s Germany. Not that Schoenberg himself was utterly austere – Armitage points out that the only existing film footage of the composer shows him playing tennis in the sunlight with George Gershwin. And he did like to say that all he ever wanted to become was a “better sort of Tchaikovsky.”

Armitage says Schoenberg in Hollywood is “a serious work, like Verdi’s Falstaff, but it is truly a comedy. An older man, set in his ways, finds himself in the midst of an extraordinary clash of cultures; in this situation he asks himself who he really is and explores how that came to be.”

In fact, it was Harpo Marx who recommended Schoenberg as a potential film composer to the MGM mogul Irving Thalberg. In the opera, the scene unfolds on an MGM soundstage where Thalberg is exploring the possibility that Schoenberg might compose the score for a forthcoming film of Pearl S. Buck’s popular novel about a Chinese family, The Good Earth. This would offer Schoenberg the opportunity to reach a new audience of millions, but it also would require him to modify or even sacrifice his artistic convictions.

The discussion therefore goes nowhere – Armitage calls it a “wrestling match.” It may have been that Schoenberg made impossible demands, on purpose. In fact, he filled some notebooks with ideas for the score, some of which used the Chinese pentatonic scale – on YouTube one can hear some of these passages played on the piano. But Schoenberg did realize that proceeding with this would be the end of him as an artist – at least in the sense that he understood.

In one of his books, the pianist and raconteur Oscar Levant relates an anecdote that suggests another reason. Thalberg vividly described a climactic scene in which the heroine O-Lan gives birth in a windswept wheat field during a storm and an earthquake. “When all that is going on,” Schoenberg asked, “who needs music?”

In the opera, this conversation leads to Schoenberg’s memories of the cataclysms of his life and art – World War I, his conversion to the Lutheran faith at the age of 24 in anti-Semitic Vienna, his conversion back to Judaism as a result of the rise of Hitler. His first wife left him for a painter who committed suicide after she returned to Schoenberg; the composer then wrote a short opera about the situation.

Much of Schoenberg’s story is painful to contemplate, above all, perhaps, his unswerving belief in his own music in world that was hostile to it. Yet Armitage insists the opera is a comedy: “Otherwise, what can anyone do? Humor is a life force. The libretto is brilliant in the way it pares the events of Schoenberg’s life down to the essentials while providing an ironic commentary; it is an opera about self-examination on all fronts, and sophisticated in all the best sense of the word. There is no shirking.”

Armitage says she loves Machover’s score. There is a panoply of technology, as there almost always is in Machover’s work, but Armitage is convinced the opera is built to last. “Yes, there are electronics and complicated interactions between live performance and film, but the music does and says it all,” she says, pointing to Machover’s evocation of an optimistic America where everything is possible, people are nonchalant and casual and syncopated. But it is also profoundly reflective, and the meditative apotheosis comes when Schoenberg realizes he has no choice but to be himself, the self his experiences and feelings have made him.

At the end of the opera, Thalberg tells Schoenberg he will never work in Hollywood, but the composer is now ready to stride further forward into his destiny. As the score puts it, “There are moments from Arnold’s past, moments from the future, all swept up in the present; the familiar is rendered strange – and vice versa.” The music varies widely in tone and content and revels in disparities of style, ranging from brief references to Schoenberg’s actual works when they are mentioned to a wide variety of American and European idioms and timbres and energies that Machover has absorbed into his own language.

“Many flavors,” Armitage says, “but all of them come from the heart.”