Get to Know The Threepenny Opera in 5 Minutes or Less

MARCH 16 – 25
By Bertolt Brecht & Kurt Weill
Sung in English, in a translation by Michael Feingold, with no supertitles.
Length: Approx. 2 hours, 45 minutes, including 1 intermission

Soho, London: June, 1838, leading up to the coronation of Queen Victoria. A street singer describes the recent crimes of the gangster Macheath—better known as “Mack the Knife.”

Mr. and Mrs. Peachum’s daughter, Polly, did not return home last night. They conclude that she spent the evening with Macheath, and Peachum—the boss of London’s beggars—vows to destroy him.

Polly and Macheath celebrate their marriage with a crowd of his men. The Chief of Police, Tiger Brown, arrives, and Macheath reveals that Brown is on the take. Polly returns home and announces her marriage to her parents, inadvertently sharing Macheath and Brown’s connection.

Macheath and Polly make plans for him to evade arrest. He visits his favorite brothel to say good-bye to his ex, Jenny—whom Mrs. Peachum has bribed. Brown arrests him.

In jail, Macheath reflects. Polly argues with Lucy, Brown’s daughter and another of Macheath’s girlfriends. Lucy helps Macheath escape, but Peachum coerces Brown into arresting him again. Back in jail, Macheath again awaits his hanging. Suddenly, a messenger arrives with startling news, and the company gathers to sing the final moral of the tale. 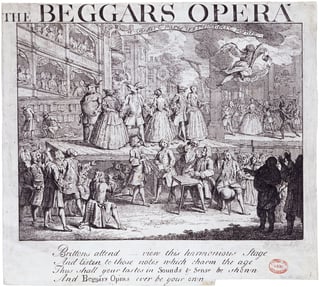 The Threepenny Opera is based on the 1728 smash hit, The Beggar’s Opera by John Gay. Gay satirized the upper crust of London society with his irreverent work, which utilized popular songs of the day with witty new lyrics. Several characters were drawn from well-known figures: for instance, the highwayman Macheath was based on the notorious thief Jack Sheppard, who escaped jail four times and penned a (possibly ghostwritten) autobiography that became wildly successful after he was finally caught and hanged in 1724. The opera poked fun at the pretensions of the elite and the conventions of Italian opera, the art form of choice for London’s high society, and lampooned
corruption, deals, and bribe-making on all levels of society. 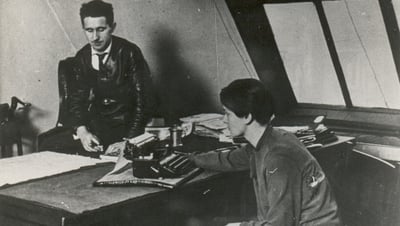 Several scholars have debated the role that Elisabeth Hauptmann, Brecht’s longtime lover and collaborator, played in the writing of Threepenny. It was Hauptmann who translated The Beggar’s Opera from English to German, seeing many parallels to the corruption of 1920s Germany. Officially, Brecht adapted her translation into the Threepenny text, but scholars such as John Fuegi claim that Hauptmann was actually responsible for 80 to 90% of the final work—without receiving a writer’s credit. This is a pattern, they say, that Brecht repeated with Hauptmann and several other female collaborators throughout his career. While the extent and details of their collaborations are still hotly debated, it’s clear that Elisabeth Hauptmann was a brilliant literary
mind who devoted much of her life and work to the political and artistic ideals that Brecht espoused.

ABOUT THE BLO PRODUCTION