Anthony Roth Costanzo takes
readers into the world of  rehearsing an opera, BLO's upcoming  Agrippina.
Our exalted King Claudio in BLO’s
production of Agrippina is played by the stellar Christian Van Horn. Christian
has appeared in many celebrated opera houses including the Lyric Opera of
Chicago Opera (where he is an alumnus of the Lyric Opera
Center), San Francisco
Opera, Los Angeles Opera, Bayerische Staatsoper, Santa Fe Opera, and the
Salzburg Festival. His roles include the title role in Le Nozze di Figaro,
Raimondo in Lucia di Lammermoor, Timur in Turandot, Colline in La Bohème,
Oroveso in Norma, the Sprecher in Die Zauberflöte, Nourabad in Pearl Fishers,
and many others. Not only do we both play the three-name card extremely well,
but we also share the same extraordinary managers. To take at look at what they
do, visit them at  Opus 3 Artists. 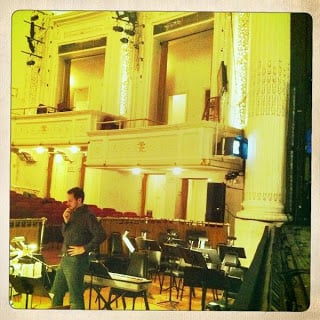 ARC
Would you say that there is one thing
Handel provides you with as a singer which is distinct from any other composer?
CVH
I would say that Handel really lets you
explore a LOT of colors in the voice. The
light orchestration allows for a huge dynamic range, rather than just sheer
volume. I would say that basses RARELY get to sing pianissimo, and Handel
leaves room for that -- especially in the recits.
ARC
You play King Claudio in BLO's
Agrippina; is he a good guy or a bad guy and how do you communicate that either
vocally or dramatically?
CVH
Claudio is a GREAT guy, even if a bit
promiscuous.  As soon as anyone becomes Ceasar his days are immediately
numbered. This is not lost on Claudio, and so he is definitely living for
the moment. His heart is good, despite his lack of fidelity. After
all, Agrippina (his wife) does not exactly make it easy for him to be
faithful to her. Vocally, I think Claudio must be very powerful -- at
times. He needs to make it clear who the boss in the room is, especially
when there are many characters present. Claudio's softer side must also be
represented but can really only appear one on one -- with Lesbo, his confidant,
or with one of the ladies.
ARC
In your experience thus far, what's the
most fun thing about being a bass-baritone?
CVH
The best part of being a bass-baritone
is the characters we get to play. While the tenors and baritones usually
get to play the love interest or hero, the basses and bass-baritones generally
get to pull the strings and make everyone dance! We often get to play very old
men, which presents a fun challenge; and, the "bad guys" are always
low voices. Nothing is more fun than playing a bad guy! Also, there are
very few operas that don't require a bass-baritone -- which from a practical
standpoint is fantastic.

To read more about Christian, visit his website, www.christianvanhorn.com