Our
brilliant conductor Gary Thor Wedow is unique in his sensitivity, skill, and
knowledge of early music. He also has a seemingly bottomless treasure trove of
wonderful historical anecdotes that inform the way he crafts opera. Gary went to graduate school here in Boston at the New England Conservatory of
Music where he studied with John Moriarty. Later, he was the Associate
Conductor of the Handel & Haydn Society. He has conducted an enormous
amount of early music: Cavalli, Monteverdi and of course Handel -- no less than
9 Handel operas for New York City Opera, Juilliard, Seattle, and Miami, among others.
Next, Gary returns to Seattle to conduct Magic Flute, and then goes
to Wolf Trap for Wolff Ferrari's Le Donne
Curiose. Gary began our interview with his
characteristic exuberance saying that, “It's terrific to come back to Boston where I got a
great beginning to a very happy life and I’m so glad to be working with
such a dynamite cast in this beautiful and genuinely funny production.” 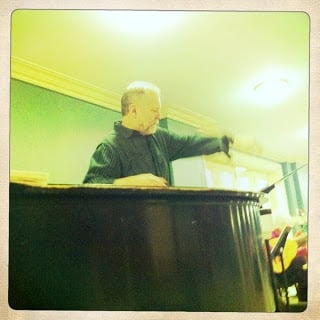 ARC
Can
you explain the fabrication, function, and feeling behind the ornamentation in
Boston Lyric Opera's production of Agrippina?
GTW
Ideally
the ornamentation comes from the emotional heart of the drama, outlining and
embroidering the line both dramatically and melodically.  The character,
during the course of the aria goes through an emotional journey and upon the
return to the beginning of the aria, their inner life is transformed, so the
ornaments reflect the transition or intensification of their emotional life
through melody.  There are the 'essential' ornaments: the appoggiatura or leaning note, the messa di voce or spinning out of the
note and the trill or warbling,
shaking of the voice. Then there are the 'divisions' which divide up one
note into many.  Handel's singers (as today's) spent hours training and
practicing patterns. As you know, the ornamentation should come from the singer
and our beautiful cast has all shaped their own ornamentation.
ARC
We
were talking the other day about Handel's life and how it had an impact on his
music. Can you speak to the intersection of life and art in Handel's oeuvre as
well as in any musician's life?
GTW
Handel
for a long time was deified with the virginal morality of the saint. Though he
was certainly the composer of heavenly music, his personal life seems very
human and emotional. Here is an immensely talented young composer who gets into
a quarrel with a fellow composer (Matheson) over who should play the
harpsichord in an opera and challenges him to a duel. Later, he becomes the
center of a group of wealthy patrons in Italy
who were probably gay and where he was known as the Saxon bear; the same circle
of intellectual artists surrounded him in London.
I feel the evidence points to him being gay and he had a passionate nature and
knew well the value of his great gift. I feel an intense responsibility to
infuse this music with deep emotion, plugging into primitive and deep wells of
primal feelings. Handel felt these emotions first and we recreate and
experience these passions ourselves, along with the audience. That's
music.
ARC
How
do you balance the exigencies of the director, singers, orchestra and
administration while trying to craft your take on an opera?
GTW
Bernard
Shaw said that opera was an art form which tried to combine five art forms,
which is four art forms too many. Everyone feels that their corner of the
opera is the most important, and of course they are right because opera needs
all of these elements. Music is the heart of opera and if you take good care of
your heart, the body is healthy. Opera is all about people; I love people and
love working with them, learning from them.  Everyone wants to perform at
their optimum, so if you enable people to do their best work, you can fulfill
your vision of the opera at the same time.  I'm incredibly grateful and
excited to be working on this beautiful opera.