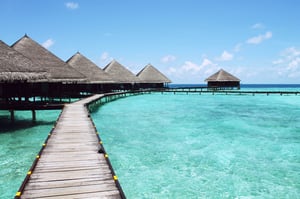 As BLO has been rehearsing and preparing Bernstein’s Trouble in Tahiti, we have been getting a lot of feedback, both internally from our staff and artists and externally from our community members, about the pivotal scene that gives the opera its name. In the aria “What a movie,” the character of Dinah gives an involved description of a fictional movie that she goes to see, titled “Trouble in Tahiti.” The film she describes is a mash-up of Hollywood and Broadway stereotypes of the 1940s – an exoticized South Seas paradise where the American military comes in and saves the day. At first, Dinah is exasperated and dismissive of the film. “What a terrible, awful movie!” she exclaims. But she gets swept away in the romance and drama of the plot anyway, entranced by its beguiling music and fantasy.

Before we go any further, let’s take a look at the scene, the 2001 BBC film version of Trouble in Tahiti.

On one level, Bernstein is clearly engaging in satire here, poking fun at the popular Hollywood films of the 1940s set in the South Pacific, as well as the smash hit Rodgers and Hammerstein musical South Pacific, which was in the middle of its seven-year run on Broadway as he was writing Trouble in Tahiti. But on the other hand, Bernstein replicates a number of harmful cliches and language in order to make his point, including simplistic Hawaiian-style “luau” themes, calling the island inhabitants “natives” (who, confusingly, shout, “Olé!”), and the plot device of the American military arriving just in time to save the white hero, a pilot who is in love with an island princess.

Do these stereotypes really bear repeating? Is there any inherent value in using another culture merely as a metaphor to serve a story’s central (white) narrative? What does it say about Dinah—and about us, as audience members—if we are invited to simultaneously roll our eyes at these exoticized portrayals and yet also to laugh at them, or worse, to secretly enjoy them? Finally, with our (hopefully) more expanded cultural understanding, does this scene from 1952 still pack a satirical punch in 2018—or is it a relic that would be better revised?

Bernstein and his wife, Felicia, were outspoken and active in liberal politics throughout his career and their marriage, including fundraising for the Black Panthers (derided at the time), raising money for AIDS in the 1980s, and generating awareness and interest in humanitarian causes from disarmament to Amnesty International. But Bernstein was also a product of his time, and wrote from the perspective of a white, Jewish man (with a complicated sexual identity, though he married, had a family, and presented a heterosexual front to society). Questions of race and identity also feature heavily in his West Side Story (that’s a whole other blog post!) and remain controversial today. His legacy, surely, is bigger than one scene in Trouble in Tahiti—nonetheless, as we prepare the opera, we find ourselves grappling with these questions and seeking what is right.

We don’t have all the answers, but we’d love to hear from you about your reactions. We’d also love to share some thoughts from artists and activists who are working in this space every day and seeking to create an arts scene today that is ever more inclusive, representative, and just.

The mission of AAPAC (Asian American Performers Action Coalition) is to expand the perception of Asian American performers in order to increase their access to and representation on New York City’s stages.

Diep Tran’s influential and powerful 2015 essay, Keep Your Hands Off of My Kimono, White People: “But yellowface/blackface/redface isn’t just about the makeup. … Appropriation goes beyond facepaint. It’s about the subsuming of a minority ethnic group to support the narrative of a dominant ethnic group.”

What about in opera? One recent case study: In 2017, Seattle Opera mounted a new production of Madama Butterfly and met issues of cultural appropriation head-on, developing program notes and lobby displays, including some previously cut music from the opera, and holding a public forum with arts leaders of color to facilitate dialogue. Read more from the Seattle Times and on the Seattle Opera archive pages.

See Trouble in Tahiti onstage and let us know what you think: