A Walk Through The Handmaid's Tale

Boston resident, English scholar, and The Handmaid's Tale aficionado Rachel Greenhaus took Boston Lyric Opera on a walking tour through Cambridge in preparation for the presentation of Poul Ruders' operatic adaptation of Margaret Atwood's famed novel. Greenhaus discusses the research behind her mapping of locations from the novel, and talks about the resonance of The Handmaid's Tale as a Boston resident today. 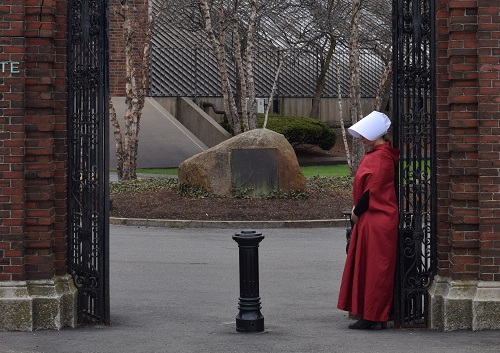 Harvard Gate: "Now we turn our backs on the church and there is the thing we've in truth come to see: the Wall. The Wall is hundreds of years old too; or over a hundred, at least. Like the sidewalks, it's red brick, and must once have been plain but handsome. Now the gates have sentries and there are ugly new floodlights mounted on the metal posts above it, and barbed wire along the bottom and broken glass set in concrete along the top. No one goes through those gates willingly. The precautions are for those trying to get out, though to make it even as far as the Wall, from the inside, past the electronic alarm system, would be next to impossible." (31)

Margaret Atwood's 1985 dystopian novel The Handmaid's Tale is a book I have read many, many times. I even used to teach it back when I was running undergrad English and writing classes in graduate school. Although my relationship with the book has grown complicated over the years as I have come to think more critically about its limited version of [white] feminism, I still find powerful resonances in its storytelling and the poetry of its language. I still highly recommend it as a work of art, particularly for anyone who lives in or around Cambridge, Massachusetts, where the book is set. Reading The Handmaid's Tale has been an even richer experience for me since moving to the area. I can walk through Harvard Square and see glimpses of Gilead superimposed upon the walls or ready to rise from beneath the surface of the streets, like the palimpsest that Atwood herself evokes on the first page of the novel. Old Burying Ground: "We don't go in, though, but stand on the path, looking at the churchyard. The old gravestones are still there, weathered, eroding, with their skulls and crossed bones, memento mori, their dough-faced angels, their winged hourglasses to remind us of the passing of mortal time, and, from a later century, their urns and willow trees, for mourning. They haven't fiddled with the gravestones, or the church either. It's only the more recent history that offends them." (31)

Informed by a close reading of the text, I have put together a map of Cambridge that shows where the sites in the book are located (or at least, my best guesses based on local knowledge and the often vague textual clues). Retracing Offred's steps would make a fascinating field trip for classes reading the novel or a great addition to anyone's literary tour of Boston and Cambridge. This is not a definitive guide, but I believe it gives an accurate sense of the basic shape of the places described within Gilead. For each location, I've included the textual citation that led me to pick it, and I've often added photos to illustrate one view of those places for those who may not know them from personal experience.

The thing that this map illustrates beautifully is how circumscribed the narrator's world is; Offred's outings are her few glimpses of freedom, of the world, but she barely makes it a mile away from home at any time. She also has memories of her surroundings from before they became Gilead, which she frequently references with nostalgia or fondness or anger, but those are fading and being forgotten as they are replaced and rewritten by the dramatic changes of the world that makes up her new normal. In a parallel way, it's fascinating to imagine the sites in the novel coexisting with our modern world. Harvard Square is different now than it was in the 1980s when Atwood was living and writing there, and obviously different from the imagined version in the novel, but all three map on top of each other to create an eerie kind of echo chamber. (And now, of course, we have the added element of the similar but different world of the new Hulu television show, which takes inspiration from the novel but doesn't exactly recreate it, and which represents a vision of Gilead-Cambridge/Boston on screen that is actually shot in Toronto. See this map from the Boston Globe--which itself figures in season two of the show in a very unsettling way--for some of the places that come up specifically in the TV version of the story.)


There are reasons why this novel resonates so much with so many people right now in 2019--why it is a successful TV show, why Atwood has decided to write a sequel, why people are turning up to protest dressed as handmaids. Ever since the book was published, Atwood has been talking about where she found her inspiration and how all she did was remix the long list of atrocities and horrors that humans have already visited upon each other in order to get her neo-Puritan dystopia up and running, and that artistic statement seems, if anything, even more legible now than it did back in 1985.

For those looking to know more about Atwood's thoughts on this topic, I highly recommend her essay "Writing Utopia," which I taught alongside the novel in my undergrad classes (you can find it in her 2005 collection Writing with Intent: Essays, Reviews, Personal Prose: 1983-2005). There she explains how the Puritans (whom she studied with the famous Americanist Perry Miller while in graduate school at Harvard) inspired her vision of Gilead (and its mapping onto Cambridge), and also her larger theory of the book as speculative fiction: "in The Handmaid's Tale, nothing happens that the human race has not already done at some time in the past, or that it is not doing now, perhaps in other countries, or for which it has not yet developed the technology. We've done it, or we're doing it, or we could start doing it tomorrow. Nothing inconceivable takes place, and the projected trends on which my future society is based are already in motion" (92). 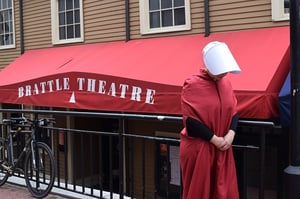 Brattle Theatre: "In front of us, to the right, is the store where we order dresses. Some people call them habits, a good word for them. Habit are hard to break. The store has a huge wooden sign outside it, in the shape of a golden lily; Lilies of the Field, it's called. You can see the place, under the lily, where the lettering was painted out, when they decided that even the names of shops were too much temptation for us. Now places are known by their signs alone. Lilies used to be a movie theater, before. Students went there a lot; every spring they had a Humphrey Bogart festival, with Lauren Bacall or Katherine Hepburn, women on their own, making up their own minds. They wore blouses with buttons down the front that suggested the possibilities of the word undone. These women could be undone; or not. They seemed to be able to choose, then. We were a society dying, said Aunt Lydia, of too much choice. I don't know when they stopped having the festival. I must have been grown up. So I didn't notice." (24-25) Widener Library: "The Library is like a temple. There's a long flight of white steps, leading to the rank of doors. Then, inside, another white staircase going up. To either die of it, on the wall, there are angels. Also there are men fighting, or about to fight, looking clean and noble, not dirty and bloodstained and smelly the way they must have looked. Victory is on one side of the inner doorway, leading them on, and Death is on the other. It's a mural in honor of some war or other. The men on the side of Death are still alive. They're going to heaven. Death is a beautiful woman, with wings and one breast almost bare; or is that Victory? I can't remember. They won't have destroyed that." (166)

Photos and video by BLO Staff

Read more Cambridge and The Handmaid's Tale on Rachel's blog.

Read more about The Handmaid's Tale on our Student Study Guide.