Conductor David Angus on Britten, LUCRETIA, and a Career in Opera

Boston Lyric Opera presents Benjamin Britten’s The Rape of Lucretia in the Artists for Humanity EpiCenter in South Boston on March 11, 13, 15 and 16 at 7:30 PM and March 17 (matinee) at 5:00 PM (note the late starting time). 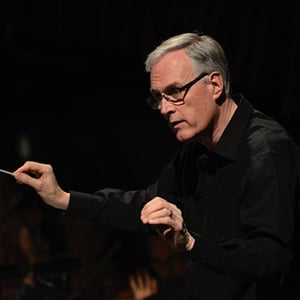 The World Premiere of Benjamin Britten’s opera The Rape of Lucretia took place in 1946, almost a decade before David Angus was born. The composer died in 1976 when Angus was only 20, so the conductor of Boston Lyric Opera’s current production of Lucretia is too young to have become a member of Britten’s immediate circle of friends and interpreters. But as member of the King’s College (Cambridge) Choir, he did sing under Britten’s baton in a 1967 concert of Britten's vernal Spring Symphony in Snape Maltings, the auditorium of the composer’s summer festival on the northeast coast of England. Soon after, in 1969, Snape Maltings was destroyed by fire, and the work that reopened the hall and the festival in 1970 was also the Spring Symphony. It remains a favorite of Angus’s – and at the drop of a hat he can still sing lilting lines from the boys’ choruses. “It was a great experience for all of us – as choirboys we sang every day, and music became our language.”

As a young man Angus studied piano and conducting, setting his sights on a career in the orchestral repertory.  But early experiences changed his course. “I can tell you exactly when it happened – I was assisting Sir Charles Groves in rehearsals for Debussy’s Pelléas et Mélisande at the Royal Northern College of Music in Manchester, where I was on a conducting fellowship, and one day it hit me that this opera was really quite good! Then I became chorus master and a resident conductor at the Glyndebourne Festival – a jack-of-all-trades there. Subsequently I conducted some operas in Italy. I had a small child then and I didn’t want to be away so much, so I took a job in Belgium with the Symphony Orchestra of Flanders, where I did get to conduct the symphonic repertory. Nevertheless, opera continued exerting its pull.”

Over the years Angus he has conducted more than 70 operas and music-theatre pieces, from standard works by Mozart, Verdi and Puccini to early music, premieres of new works, and even Gilbert & Sullivan operettas and beyond to West Side Story and Sweeney Todd. No British conductor can escape encounters with Britten, England’s most prominent 20th century composer. In fact Angus has conducted nine of Britten’s operas, nearly all of the chamber operas as well as three of the largest pieces. It was opera that led Angus to his American debut at the age of 51 at Glimmerglass Opera in upstate New York and subsequently to BLO, where he has been music director since 2010.

Angus is a familiar figure to BLO singers, chorus, orchestra and audiences; he is invariably in town even for productions he does not conduct himself to keep an eye on things and advise on musical and production matters. But he is probably less well known in our wider musical community because his home is in England and his career continues to enjoy a wide geographical scope.

Late last week Angus gave an interview between some meetings in the BLO offices and an afternoon rehearsal. Looking trim, fit and energetic, Angus speaks precisely and to the point.

“I guess I would describe myself as a devoted fan of Britten and I have been lucky to know and to work with many of Britten’s stalwart colleagues and friends  This is my second production of The Rape of Lucretia – I did it first during the Dartington Festival. Although there have been several recordings of the opera, productions in England remain uncommon – the premiere was at Glyndebourne, but it had never been done there since until just a few years ago.”

The piece was controversial when it was new because of its subject matter, a tragic story that has caught the imaginations of many artists in many centuries. Angus points out that it does have a political dimension – the rape of the chaste Lucretia led to the fall of the Etruscan dynasty and to the founding of the Roman Republic.  And of course it has a very strong moral and human dimension – Lucretia publicly accuses the man who raped her and creates her own destiny – embraces it, really – and this remains relevant in the me-too era.

The title role was a triumph for the now-legendary British contralto Kathleen Ferrier, but audiences were sometimes sparse, and not everyone was won over by the piece. John Christie, who created the opera festival at Glyndebourne, his family’s estate, once saw an unfamiliar young man wandering in the gardens. He went out and asked the young man who he was. The reply was, “I’m Benjamin Britten and I wrote the new opera,” to which Christie curtly replied, “Well, you shouldn’t have.”

But to many, Britten’s music was immediately compelling and it marked a new direction for him. His previous opera Peter Grimes was a large-scale work and an epochal event in the history of music in Britain. His concern in The Rape of Lucretia was to treat large themes on an intimate scale – there are only eight singers and 13 instrumentalists working in a minimal physical production that could tour easily. “There is no chorus, but there are two commentators who narrate and illuminate the story – a tenor and a soprano. They represent the community and they judge the events. Like the Evangelist in Bach’s Passion settings, the Male and the Female Chorus become fully involved in the story.” 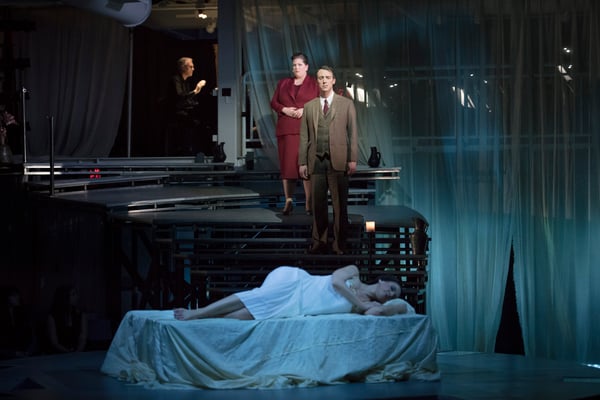 The orchestra is “a string quintet, a wind quintet, and a rhythm section – piano, percussion and harp,” Angus says with a grin. “It is a perfectly balanced little group, but it can sound almost as full and colorful as a large orchestra. He knew the musicians he was writing for – this may be the most difficult harp part ever composed, yet it is completely practical, like Liszt’s music for the piano – there are never more notes that your ten fingers can handle.  It is very efficient writing – there are no notes that he doesn’t need. And the astonishing thing about it is that there is so much drama and heart and emotion in it – the audience is on the edge of its seats and in tears at the end when she meets her husband after she has been raped. The music is built over a walking bass, like Dido’s lament in Purcell’s Dido and Aeneas, with painful suspensions in the harmony. It is almost incredible that all this could have emerged from inside such a staid English gentleman as Britten.”

Angus is extremely pleased with his cast which is led by the remarkable Kelley O’Connor in the title role. Since bursting on the scene as the poet Lorca in Osvaldo Golijov’s Ainadamar in 2003, O’Connor has been one of America’s busiest singers both in opera and as an orchestral soloist.  Metropolitan Opera mezzo-soprano Margaret Lattimore returns to the BLO after a long absence as the warm-hearted Bianca and Duncan Rock, the Lyric’s last Don Giovanni, is the lustful Tarquinius, the role he created in the Glyndebourne production by director Fiona Shaw. The other parts are in the hands of younger artists, including tenor Jesse Darden and soprano Sara Womble, who sang multiple roles in Tod Machover’s Schoenberg in Hollywood earlier this season.

Despite the way the music compels attention and stirs the spirit, the libretto by the playwright Ronald Duncan has often been viewed as a problem. Some people have been disturbed by the way the text treats the story of a brutal rape as a Christian allegory – although the historical event of the rape predated Christ by several centuries. Others have found Duncan’s rhetoric excessively “poetical” and hard to follow and difficult to understand when sung.  Angus says he and the BLO cast have tried to meet this problem head-on.

“We spent a lot of time on the text – we even had table readings of the text without the music and working out the images and the multiple levels of the language – I think the poetry is fantastic, and well beyond what we find in most opera librettos. And the opera is a dramatic piece – not a Christian sermon. I think the opera really does hold up and it does speak to today in the way it presents a feminist point of view about how shocking and shallow men can be, and the disastrous effect their behavior can have. People still dismiss male chauvinist piggery as ‘locker room banter’ but it is truly appalling and horrific.”

When he is in Boston Angus commutes between the company offices, the rehearsal space in the Boston Center for the Arts, and the performance venue on a bicycle, even when there is a foot and a half of snow on the ground. In England he lives in Sussex, within commuting distance of London and Glyndebourne.  His daughter is now 20 and now in her second year of medical school; his much younger son, now 3, lives at home with Angus and his wife, the opera singer Lee Bisset – except, of course, when he travels with his father. Angus clearly loves working, but he also clearly loves being comfortably at home with the cliffs and the ocean. “We are right on the coast and from the upstairs windows we can gaze at the sea.”

Learn more about The Rape of Lucretia and purchase tickets:

Images (top to bottom): David Angus, headshot; A scene from BLO's The Rape of Lucretia, with Kelley O'Connor (center) as Lucretia, Antonia Tamer as the Female Chorus, and Jesse Darden as the Male Chorus; David Angus is also visible upstage. Liza Voll Photography.