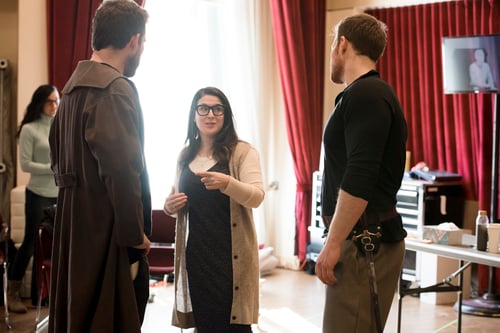 The rape of Lucretia is a narrative rooted in historical fact: the tale of a Roman matron’s rape and subsequent suicide has lived on in the Western imagination for 2,500 years. This story has taken many forms in literature and in art, most of which have come from a male perspective. What developed is a mythology of Lucretia, an object of desire whose destruction gave rise to many interpretations. When she was used as a symbol of courageous resistance to the oppression of a Roman tyrant, her story inspired the historical revolt against the last Roman monarchy. What did the story mean to Benjamin Britten, when he created it in the 1940s? And what does it mean to us today as we view it?

In Britten’s opera, we can see Lucretia has some agency as a human being, as a woman. The bedroom scene between Tarquinius and Lucretia begins as a negotiation between the oppressor and the oppressed. Knowing he could take what he wants from her, why all the effort and conversation? Because he ultimately wants Lucretia to desire him, to prove her husband’s assertion of her chastity wrong, and then to acquiesce and submit to his will. At first, he attempts to seduce her—not rape her—but her rejection of him is unequivocal. She is resolute and clear in her stance, as well as in her language. She says no, over and over again which humiliates him. Enraged by her steadfast will, he chooses to threaten and then to overpower her.

The next morning, Lucretia calls her husband back to Rome. When her husband, Collatinus, arrives accompanied by Junius (whose goading of Tarquinius led to the rape) Lucretia tells them what Tarquinius has done to her. Where she could have remained silent she chose to speak up and give critical testimony. Britten makes this moment the climax of the opera. Junius observes Collatinus’ goodness; Lucretia’s husband absolves her of her shame and lovingly comforts her. In spite of this, and in their presence, she chooses to take her own life.

Over the centuries there have been various interpretations of Lucretia’s suicide. Did she believe it would free her husband and her family from the inevitable stigma of their shame? Was it an attempt to restore her purity? Could it have been a means to avoid a pregnancy engendered by violence? Was it denial of an uncertain future? Or was it a defiant act of violence to combat the violence done to her? Perhaps she kills herself not because of shame, but because she believes she will be more powerful in death; her body has been corrupted, but not her will. She chooses to have the final say in her narrative, perhaps believing that her sacrifice might change the future. She demands that the men not let her self-chosen death be in vain and offers her violated body as a metaphor for Rome. Junius will use Tarquinius’ crime and Lucretia’s sacrifice to incite a rebellion against the monarchy. Lucretia’s testimony provided the justification for a revolution, but her suicide was the weapon. Would the men in her family and her inner circle have been successful in overthrowing the monarchy without her act of resistance? How does Britten view Lucretia’s death?

Britten wrote this opera in the immediate aftermath of the Second World War, not long after he had given two concerts in the recently liberated Bergen-Belsen concentration camp. Britten may have been considering the rebirth of the human spirit following this horror. He may have been searching for narratives that do not lead inexorably to more violence, more war and more corruption of the human will. He frames the rape of Lucretia in a Christian context.

While the Christian coda may have been an attempt to offer comfort it is still cast in a male dominant perspective. The Male Chorus asserts faith in human redemption through Christ’s suffering and claims to see the larger truth; he assumes the Female Chorus will follow. However, she stands planted in grief. She questions the possibility of human redemption. Or perhaps she questions the human capacity to end cycles of violence and destruction.

As Ian Donaldson points out in The Rapes of Lucretia: A Myth and its Transformations, there are examples of other ancient stories “in which the steadfastness of a woman serves as a moral example to an oppressed people, inciting them to revolt.” In this particular story, however, a “fundamental feature” is “that of a tyrant” who is “overthrown because of a sexual transgression.” This, to me, may be the most relevant and timely aspect of the story. The Rape of Lucretia is more than a tragedy of  ancient Rome, more than an artifact of the past. On the contrary, it confronts us with its current resonance.

Learn more about The Rape of Lucretia, or purchase tickets:

SARNA LAPINE | Stage Director
Sarna Lapine is a New York-based director and developer of new work. Ms. Lapine’s recent works include Noises Off! (Two River Theater), Into the Woods (Juilliard), Frost/Nixon (Bay Street Theater), You Are Here, a new musical (Goodspeed Musicals); Photograph 51, Japan premiere (Umeda Arts Theater); Sondheim on Sondheim with the Boston Pops and the Los Angeles Philharmonic; and the Broadway revival of Sunday in the Park with George, starring Jake Gyllenhaal and Annaleigh Ashford. Ms. Lapine directed the second national tour of Lincoln Center Theater’s South Pacific and was Associate Director of The National Theatre’s War Horse (North American Tour and Japan production). Ms. Lapine began at Lincoln Center Theater as Bartlett Sher’s assistant director on The Light in the Piazza and worked with him on the Tony-award winning revival of South Pacific, as well as the new musical Women on the Verge of a Nervous Breakdown, and Clifford Odets’ Awake and Sing! Upcoming work includes Kate Hamill’s adaptation of Little Women (Primary Stages).

This piece was written by the director for the program book of The Rape of Lucretia.