Looking Back on In the Penal Colony: Feedback and Reviews

As we approach the holiday season, let's take a moment to look back on our seventh Opera Annex production, In the Penal Colony by Philip Glass. Staged in the historic Cyclorama at the Boston Center for the Arts, this unique, dark, and unsettling production left an indelible mark on critics, students, and audience members alike. 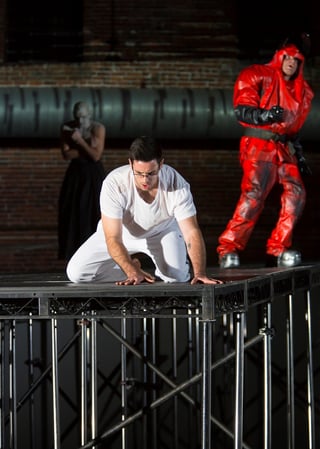 “The stage pictures and imagery of every moment [were] astounding and heart-clenching.”
– A. Alexander, MIT student

“Excellent performances … this newest production will be counted as another in [BLO’s] column of successes.”
– Boston Globe

“I was struck by the powerful string instruments and by the poignant theme. I am a new convert now against the death penalty. It's hard to explain, but this opera has broadened my views on that subject.  Thanks for giving the opportunity to expand my mind. I hope I can do the same for my students.”
– Boston Public Schools educator

“As part of its imaginative Opera Annex program, Boston Lyric Opera upended convention even further by putting the piece on in the Boston Cyclorama ... [T]his cavernous space, cleverly treated with absorptive materials as part of the set design, proved ideally resonant for voices and instruments, luring the audience into the opera’s ghoulish spell.”
– Wall Street Journal 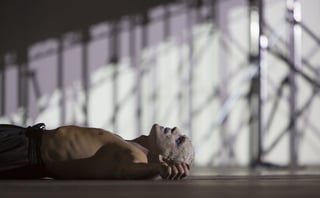 “I really enjoyed the opera and it really was unforgettable. I wasn't expecting it to be an opera so I was really surprised when the actors started singing. The lyrics on the screen was a great way to keep the audience focused. It also worked well when the Officer was struggling with his emotions inside him and the machine breaking down. I first thought the screen itself was not functioning well but soon realized that it was part of the theater. It was amazing.”
– M. Saito, Boston College student

All photos by T. Charles Erickson for Boston Lyric Opera.