The Danish composer Poul Ruders first came to the United States in 1986, the year after Margaret Atwood published her novel The Handmaid’s Tale. It was then that the late composer/conductor Oliver Knussen brought Ruders to Tanglewood for the American premiere of his craggy orchestral work, Manhattan Skyline.

Ruders didn’t read The Handmaid’s Tale that summer – he points out that was long before that he calls the “Hulu-baloo” about the TV series based on the book. But it was there that he met the first and fiercest of his American champions, the guitarist David Starobin and his wife Becky. Ruders has since composed a significant repertory for Starobin and his instrument. The Starobins also run a record company, Bridge, that has to date produced 20 worthwhile CDs featuring Ruders’ music.

Now just about to turn 70, Ruders has created an immense catalogue of music, diverse, distinctive, and distinguished. There are 45 orchestral works, as well as chamber music, choral music, vocal music, keyboard music, and a new concerto for accordion and orchestra. There are also four operas, including The Handmaid’s Tale, recently produced by Boston Lyric Opera, with a fifth awaiting its premiere in Santa Fe this summer.

Twenty years ago, Ruders was living in London in what he impishly calls his “middle period” as a composer. At that time the British opera administrator Elaine Padmore was appointed the director of the Royal Danish Opera in Copenhagen. Padmore was troubled by one embarrassing aspect of her new job – it had been 38 years since the company had produced a new opera. She thought it would be appropriate to plan and schedule a new opera by a Danish composer, so she contacted Ruders, who was ripe and ready. The result was an adaptation of Margaret Atwood’s dystopian novel The Handmaid’s Tale. The first performances in 2000 were successful, and there were subsequent productions in London, Minneapolis, and Toronto, which is where Atwood lives. The Danish record company Dacapo issued a live recording on CD.

Now following the immense success of the television series based on Atwood’s book, a second wave of new productions has begun. The first of these was in Melbourne, Australia, and the opening night of Boston Lyric Opera’s production met with a sustained roaring standing ovation. There are going to be subsequent productions in San Francisco and Copenhagen and in other cities in Europe and America.

Before the dress rehearsal of BLO’s staging, Ruders came to the conference room in the Company’s downtown office to talk about the opera. He’s tall, lean, intense, wry. His English is lightly accented and linguistically adroit, and he enlivens his remarks with a sense of humor that is both robust and offbeat.

The Handmaid’s Tale was his second opera – and, he says, his first successful one. His first work in the genre was Tycho was about the bizarre household of the 16th-century Danish astronomer Tycho Brahe and his complicated relationship with his assistant and protégé, the German mathematician and astronomer Johannes Kepler. In the list of his works Ruders describes Tycho as a “tragic operetta.” It has not been performed anywhere since the premiere in 1986, but Ruders says he remains grateful for his first operatic experiment. “It taught me exactly how NOT to approach writing an opera. And after all both Wagner and Verdi had the same experience with their first operas. After Tycho I was still scared of opera – I felt as if I were crawling under the roto-wash, but it got me off the hook and I knew I loved opera – you can only hate opera if you don’t know anything about it.”

A friend had urged Ruders to read The Handmaid’s Tale so he went to the library and checked out a copy. “I realized immediately that his book was immensely powerful on so many levels – as a narrative with illicit sex, which is always good in an opera, processionals, public executions. And on the emotional level it has everything, and opera is first and foremost about emotion. And the protagonist is such an interesting character, a nervous, modern being, rebellious but quiet, timid but not without courage. I knew immediately she would be a mezzo-soprano, not a heroic soprano or a coloratura. For me the dramatic pinnacle of the opera comes in a really evil moment in the second act. In the time before the Republic of Gilead, Offred, the protagonist, has lost her husband and her daughter. Serena Joy, the wife of the Commander Offred must serve, has known this all along, the whole time, and in order to preserve her own comfortable situation and status, she urges Offred to copulate with the handyman Nick. She tells Offred that she has a photo of her daughter and once Offred has done the deed, she will show it to her. At the moment she does, there is no orchestra – just a single string player bouncing the bow onto the string.” In the performance, the effect is so powerfully emotional that it feels as if Offred has lost the power to speak or sing.

From the beginning, as he read, Ruders heard music, his own music. But he knew he’d need a real theater professional to create a scenario and craft a text. Atwood was intrigued by the idea of a Handmaid opera but did not want to get involved in the process, perhaps because of a bad experience she had had with adapting Harold Pinter’s script for the unsuccessful 1990 movie based on her novel.

In this situation Elaine Padmore thought of an old classmate, an actor and writer named Paul Bentley, so she called him. Bentley hadn’t heard any of Ruders’s work yet, but Padmore reassured the composer that Bentley did read music and after a friend had lent him a disc of Ruders’ music, Bentley signed on.

By this time Ruders had moved back to Copenhagen, so the collaboration proceeded mostly by fax. It was a happy collaboration. Ruders says, “we thought along the same lines. Clarity was of prime importance, and I had learned that sentences in librettos need to be short – singing a sentence takes a lot longer than speaking it.” Bentley created a fluid and symmetrical scenario for the two acts he went on to write in English; Ruders translated the text into Danish as he composed the music, which for him was one of the most complicated elements of his task. “Most Danish words have far more syllables than their English equivalents – in English ‘love’ has one syllable, but in Danish it has three! But I needed to do it because it was so very important for the national opera house to have this premiere in the national language.”

Ruders was impressed by what he had seen of the BLO in rehearsal. “The first production was very elaborate scenically and very costly; there was a revolve on the stage and a full setting for each short scene – the original director Phyllida Lloyd went on to direct Mamma Mia!. This production is very simple – when the scene is in a bedroom, the crew rolls in a bed. The story could be happening anywhere, in any time and it is easy to move between the Time Before and the present.” Ruders was simultaneously delighted by the irony that the production is simultaneously unfolding in the very basketball court at Harvard University that Atwood’s novel had converted into the Red Center where the Handmaids were trained.

There are many styles in Ruders’ music, some of them heard simultaneously, but all of it sounds in his own voice. He points out that transparent, “happy-go-lucky” minimalist music characterizes the scenes that take place in the Time Before; Offred’s present is defined by a “harsh, unrelenting orchestra.” There are some musical quotations in Ruders’ score, most prominently “Amazing Grace,” which also figures in the original novel; audiences can also hear Bach’s “Bist du bei mir” and “London Bridges.” But he is careful not to group himself with the so-called “collage composers.” “If you are going to allude to other music you must be very careful and choose wisely – and make sure that what you are quoting lies in the public domain! Otherwise this process can sound tacky. If you do this well and with restraint, the emotional effect can be overwhelming. In this regard, I am not shameless like Shostakovich!”

For this production, Ruders did “slightly slim down” the orchestration. “I took out two flutes and a contrabassoon and reduced three percussionists to two very busy guys. But the audience is not missing anything and opera does need to be a pragmatic enterprise. This will make the opera easier to travel.”

After Handmaid, Ruders went on to compose another successful opera with Bentley, Kafka’s Trial, which blended an operatic treatment of Kafka’s novel with the complicated personal and emotional life of the writer when he created it. This was followed Selma Jezkova, a 75-minute one-act opera which is based on the story told in Lars von Trier’s controversial film Dancer in the Dark. Ruders appeared especially excited about his new opera for Santa Fe – “The Thirteenth Child is a fairytale fantasy based on the Brothers Grimm – ‘grim” in many ways; Hans Christian Andersen also rewrote the story. I enjoyed writing this opera very much; it has a happy ending so it turns out being a feel-good opera.”

The Handmaid’s Tale is not a feel-good opera – “The ending is so shaky that we don’t even know what actually happens. …. What I want the audience to leave with is a great sympathy for Offred, an empathy, a love. And to leave with two fingers crossed for her freedom in one way, or another. The world must not not come to this. If a writer in 1915 had predicted Auschwitz within 25 years, nobody would have believed it. But in the here and now, we know that anything is possible.” 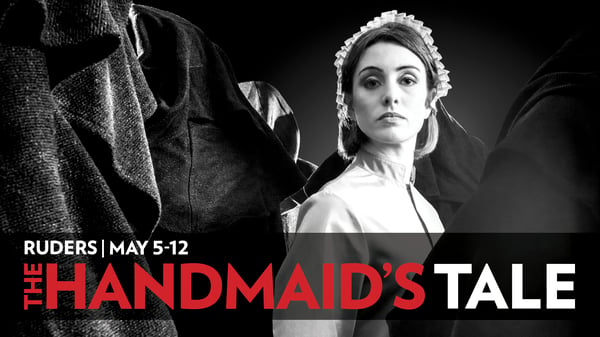