Opera in the Golden Age of the Feminist Dystopia 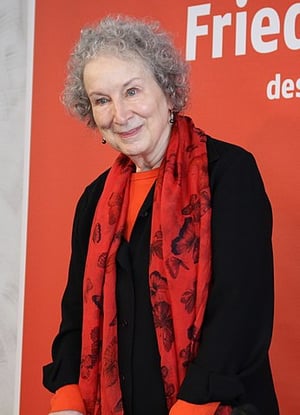 It has been said that we are living in the golden age of the feminist dystopia. Head to the library and you will find shelves full of them: in Vox (2018), by Christina Dalcher, women in the United States are permitted to speak only 100 words per day. In Louise Erdrich’s Future Home of the Living God (2017), evolution starts to work backwards; pregnant women find themselves under siege by the panicked government. Bina Shah’s Before She Sleeps (2018) takes place in a Middle Eastern city where women die en masse, and those who survive are forced into polygamous marriages. Yet even as these fictional tales proliferate, it remains highly unusual to see a similar story on the operatic stage. Why are there so many feminist dystopias in fiction, and so few in opera? And can The Handmaid’s Tale, as both an opera and the foremother of these recent novels, bridge this gap?

Margaret Atwood was initially skeptical about the prospect of turning her wildly popular 1985 novel into an opera. “I had a brief, nightmarish vision,” she later wrote, “of a line of high-kicking handmaids revealing their beige, utilitarian undergarments while singing some version of the Anvil Chorus.” Like other feminist dystopias, The Handmaid’s Tale depicts a bleak world that holds up a mirror to the sexist underpinnings of our own. (Unnervingly, the current popularity of this genre has prompted cheerily titled “listicles” online: I recently came across “4 New Feminist Dystopias You Should Read ASAP.”) Works that fall within the category of feminist dystopia are generally written by women and portray great violence done to women: disease, death, and punishment, often perpetrated by tyrannical governments. To Atwood, there seemed to be a chasm between these fundamental characteristics of her novel and the extravagance and spectacle of opera.

There are other reasons that an operatic adaptation of The Handmaid’s Tale—or any other feminist dystopia—is not an obvious choice. One straightforward but illuminating explanation is that we hear few operas by women at all, dystopian or otherwise. (Thankfully, that is starting to change; operas by women have been awarded two of the last three Pulitzer Prizes.) 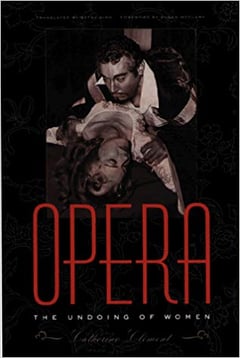 Another, perhaps more troubling, possibility is that operatic plots, unto themselves, have long been a dystopian place for women. In her foundational scholarly work, the philosopher Catherine Clément argued that an uncomfortable truth about opera is its reliance upon the “undoing of women”: women in opera are harmed, assaulted, raped, and murdered with distressing frequency, and all that violence is glossed over by the beauty of the music. Composers interested in creating an operatic feminist dystopia might risk simply reiterating that status quo, rather than challenging it. Yet other scholars have come to very different conclusions than Clément: for instance, by showing how opera actually empowers female performers, or how women have the agency to interpret their roles in ways that resist and defy that “undoing.” As this debate suggests, opera’s treatment of women remains an important point of reckoning for audiences who know and love this art form.

There are other, more expansive ways to think about the connection between opera and feminist dystopia. Far from reducing The Handmaid’s Tale to a surreal, creepy chorus line, opera can open up complex and communal ways of engaging with the world that the novel so strikingly depicts. Consider, for example, the eerie fact that you are seated in a gymnasium that may be precisely the one Atwood had in mind. As the author noted in a 2017 essay, one of her goals in the novel was to explode the myth that it can’t happen here: “Anything could happen anywhere, given the circumstances.” In this production, that truth becomes inescapable. It is dramatized, visceral: rather than just reading about the hypothetical possibility of this space as the Red Center, you experience that transmogrification in real time and among other people. It is happening here. 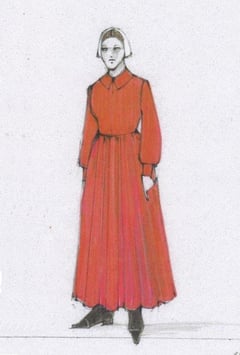 Another intriguing point of connection joins opera’s “total work of art” status with the totalitarian nature of dystopia. If opera is about creating a whole world onstage via cinematic scale and the combined power of drama, music, and visual spectacle, dystopias rely upon a similarly absolute sense of reality. The Handmaids are especially vulnerable to this distortion of reality: they are barely permitted to venture beyond the Commanders’ homes and are stripped of their own names; their enormous bonnets, or “wings,” literally constrict their vision to what is immediately in front of them. (Though, in the BLO production, you may notice that the Handmaids rarely wear their smaller bonnets, so that the singers are not impeded in any way by having their ears constricted.) Opera audiences—who, similarly, see only the reality depicted before them onstage—gain the ability to identify with the Handmaids’ plight, and with the way that insidious power can reach into every aspect of one’s perception.

Yet rarely do characters in a feminist dystopia passively accept the version of reality offered to them by totalitarian forces. Offred maintains her sense of self despite attempts to crush it: she plays Scrabble, engages in wordplay, and holds on to her memories as best she can. The layered complexity of the score, which combines an array of musical fragments rather than offering a single, unified sound, offers a sonic parallel to these hidden attempts. It makes Offred’s resistance audible, a musical representation of how she refuses to accept her fate.

If the dystopian nature of this society is incontrovertibly clear, Atwood has been more circumspect about whether her tale is a feminist one. “Is The Handmaid’s Tale a ‘feminist’ novel? If you mean an ideological tract in which all women are angels and/or so victimized they are incapable of moral choice, no,” she writes. “If you mean a novel in which women are human beings—with all the variety of character and behavior that implies—and are also interesting and important....then yes.” This tension between totality and variety is, ultimately, not unique to feminist dystopias. It is at the heart of opera in general, which creates a multidimensional world onstage but necessarily leaves room for individual
complexity within that world. Opera invites—even demands—the ambivalence that Atwood seems to prize. Perhaps as more work by women makes its way into the opera house, a golden age of feminist dystopian opera awaits.

Lucy Caplan recently completed her Ph.D. studies at Yale University, writing a dissertation on African American opera in the early twentieth century. She is the recipient of the 2016 Rubin Prize for Music Criticism.