“The only true history of the times”: African American History Onstage

In Crossing the Line to Freedom, opera and song will bring the past to life. Spanning the 19th and 20th centuries, from Harriet Tubman’s heroic rescue of enslaved people in the antebellum United States to Martin Luther King’s leadership during the modern civil rights movement, the program shows how notable individuals – as well as ordinary people whose names are not as well remembered – have agitated for change and shaped the course of history.

Crossing the Line joins a long tradition of staged performances that dramatize the African American past. Black performing artists have long recognized that the stage is a vitally important platform for the telling of historical stories. As the African American theater critic Lester Walton wrote in 1903, “The stage is the medium by means of which ideas – whether true or false – are disseminated; where many opinions are molded…. The stage will be one of the principal factors in ultimately placing the negro before the public in his true and proper light.” Written just a few decades after the end of Civil War, and as Jim Crow segregation continued to oppress African Americans, Walton’s words encapsulate a crucially important idea. In a nation that regularly devalued and distorted narratives of the African American past, entertainment was never merely entertainment. Rather, it represented a prime opportunity to contest stereotypes, instill a sense of pride among African Americans, and educate audiences of all races.

Providing evidence of black achievement onstage was especially important given the pervasiveness of blackface minstrelsy, which had been the most popular form of entertainment in the nineteenth-century United States and continued to attract large audiences well into the twentieth. Minstrelsy, which featuring white performers who wore blackface makeup as they joked, sang, and danced onstage, worked to circulate racist stereotypes and negative images of African Americans across the nation. Then and now, however, black artists have worked to combat those stereotypes and put forth other representations of black life. Large-scale works which told complex stories – whether they focused on particular historical moments or offered a sweeping view of black history writ large – did just that. These works of art not only counteracted the harmful representations found in minstrelsy, but also created works of art that were richly creative and innovative in their own right. 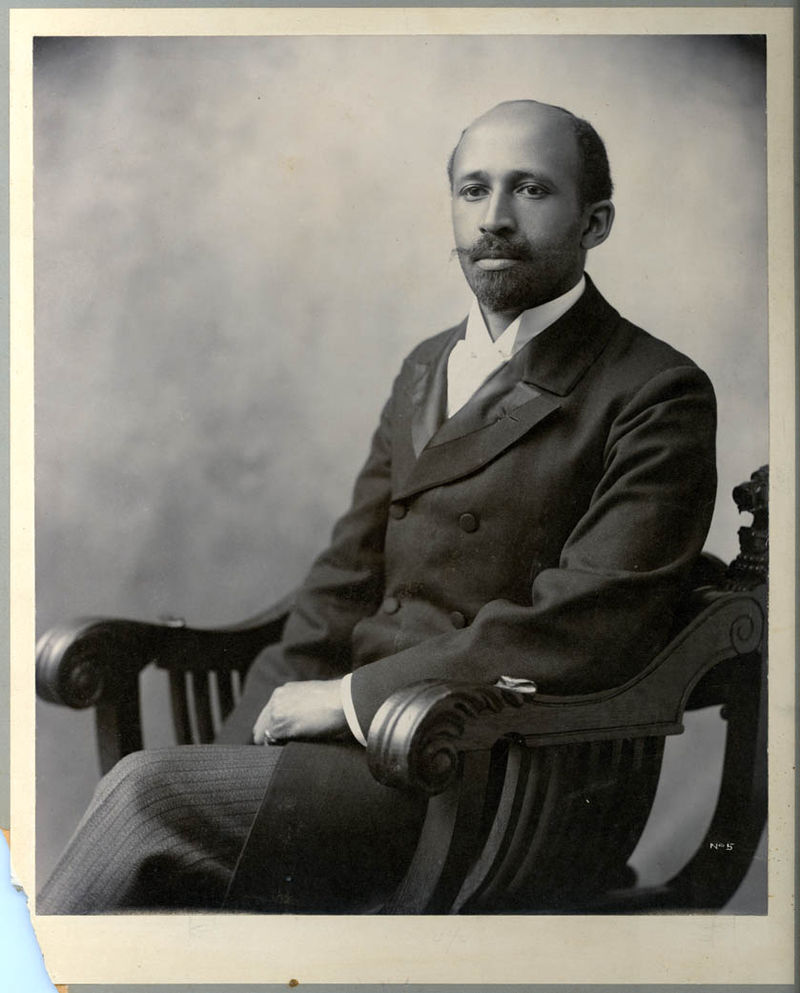 Examples of this tradition abound. Early in the twentieth century, African Americans embraced the tradition of community pageantry, a then-popular feature of civic life in towns and cities across the nation. Pageants were big, communal spectacles. Amateur casts, often numbering in the hundreds, reenacted past events in order to celebrate local history, express patriotism, and promote social reform. African Americans were often excluded from municipally sponsored pageants, but they reinvented the tradition on their own terms. Many pageants celebrated black achievement; works like By their Fruits: A Pageant of the Negro Race and Milestones of the Negro Race, both performed in 1924, are typical examples. By far the most spectacular and widely known was W. E. B. Du Bois’s The Star of Ethiopia, first presented in 1913 to honor the 50th anniversary of the Emancipation Proclamation. Ethiopia called for a cast of hundreds and lasted three hours. The first three of its six episodes are set in Africa, which Du Bois portrays as a land of glorious civilizations and an honorable past. Refuting the popular racist notion that Africa was backwards and irrelevant to modern life, Du Bois reclaimed the continent as a vital source of racial pride. 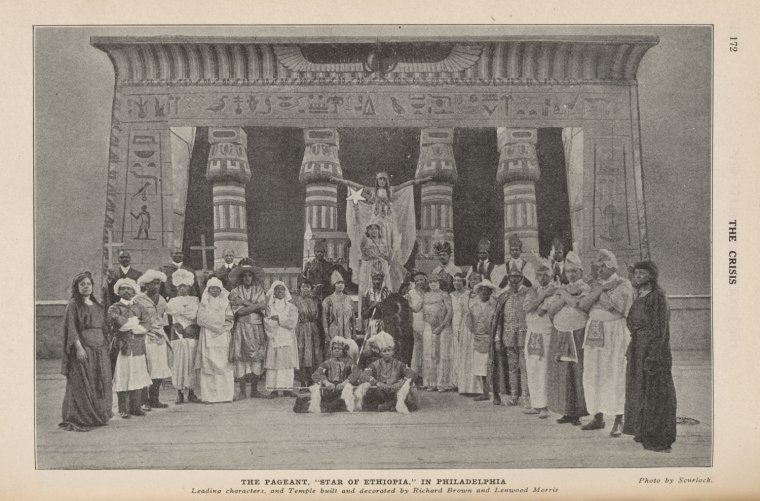 During the Harlem Renaissance, the pageant tradition continued with works like O Sing a New Song, performed at the Chicago World’s Fair in 1934. Featuring musical contributions by some of the day’s most eminent black musicians, including William Grant Still and W. C. Handy, the pageant dramatized both black history and the development of black music over the centuries. As program notes for the event proclaimed, “The Negro will be his own historian in song and drama at the coming pageant…Today he reads the future of his race in the fruitful lives of men who have distinguished themselves as educators, as scientists, as writers, as painters, and greatly as composers of music.”

Similar creative endeavors took place on the concert stage. One notable example is Duke Ellington’s Black, Brown, and Beige, which premiered at Carnegie Hall in January 1943 before an interracial audience. Ellington described the 45-minute piece as a “parallel to the history of the American Negro” in three parts. It begins with a celebration of ancient African civilizations and a devastating evocation of the violence of the Middle Passage, describes the slow process of abolition and the heroic actions of figures like Harriet Tubman, and highlights the patriotic participation of African Americans in various wars (a highly relevant subject at the piece’s premiere during World War II). Ellington also was careful to note that he saw Black, Brown, and Beige as a corrective to historical narratives that failed to mention lesser-known African Americans: in a script meant to accompany the piece, he highlighted the “gone from the pages of history / Names of black men who made us free.” Comprised mostly of instrumental music, the piece offered a less straightforward representation of history than did the aforementioned pageants. “Parallel” to history without being an exact historical narrative, it was open to a wide range of interpretive possibilities.

Ellington’s work exemplified a broader sense of skepticism that had developed by the middle of the twentieth century regarding the possibility of telling a straightforward, linear historical story. History was too messy for that; the contributions of ordinary, unremembered people too multifarious, the “great heroes” model falsely neat. Dramatic and musical works reflected this uncertainty. During and after the modern civil rights movement, such works tended to focus more on individual moments and stories rather than large-scale linear narratives, a shift which invited greater nuance and ambiguity.

In opera, a wave of operas based on events and figures from African American history appeared beginning in the 1970s: Ulysses Kay’s Jubilee (1977) and Frederick Douglass (1991), Anthony Davis’s X: The Life and Times of Malcolm X (1985) and Amistad (1997), and Dorothy Rudd Moore’s Frederick Douglass (1985) The 1970s also saw the revival of several operas by African American composers written early in the century, including Scott Joplin’s Treemonisha, which was written in 1911 but wasn’t performed in full until 1972 (by the Atlanta Symphony and the Morehouse Glee Club) and 1976 (by Houston Grand Opera, with a new orchestration by Gunther Schuller). Artists who have continued to explore the long sweep of black history have often done so in more experimental ways. For instance, Suzan-Lori Parks’ The America Play (1993) features black characters, including an Abraham Lincoln impersonator, who work at a historical reenactment amusement park called The Great Hole of History – a symbol of the impossibility of creating a fully accurate narrative of what happened, and of the way that history is always, to some degree, incomplete.

Perhaps it is that very incompleteness that has made staged performances so appealing to generations of African American playwrights and composers. A scene from Ralph Ellison’s celebrated 1952 novel Invisible Man helps explain this phenomenon. Walking down the street in Harlem, listening to a “languid blues” playing from the windows of a record shop, the protagonist poses a question. “Was this all that would be recorded?” he muses. “Was this the only true history of the times, a mood blared by trumpets, trombones, saxophones and drums, a song with turgid, inadequate words?” It’s a powerful claim: that the unwritten sound of the blues records what other ways of knowing elide or forget. As Ellison suggests – and as multitudes of artists have expressed through their work – it is in music and drama that history finds its home.

Images: W. E. B. Du Bois, photo taken in summer 1907 in connection with the annual Niagara Movement meeting; The pageant, "The star of Ethiopia," in Philadelphia (Schomburg Center for Research in Black Culture, New York Public Library); Duke Ellington at the Hurricane Club 1943.