RESISTANCE! How Underground Gay Life Thrived in the 1950s

Fellow Travelers dramatically portrays how anti-gay prejudice shaped the lives of gay men and lesbians during the Lavender Scare of the 1950s. Given the tremendous pressures to resist or hide being gay, lesbian, or transgender in those years, it would be easy to think that LGBTQ life disappeared, or was a miserable existence.  But in fact, many people managed to enjoy a fun, if very underground, nightlife in Boston and other cities. Some even organized political and social resistance movements against the laws and customs hemming them in.

During this decade, LGBTQ people went to bars to meet others and to find places where they could be themselves -- away from the strong social condemnation of the straight world. 1950s Boston had a string of bars from Scollay Square to Park Square that attracted gay people from around the region. While behavior was strictly regulated by the police and licensing board agents, bars were allowed to flourish. Some of these establishments were destroyed by urban renewal in the 1960s but others were so successful that they continued to exist well into the 2000s when rising property values finally caused them to close. (One of the remaining bars is among the oldest gay establishments in the country.) 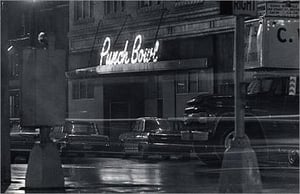 The Midtown (also called the Cha Cha Palace) on Warrenton Street was the first bar to feature same-sex dancing, with The Punchbowl, located around the corner, quickly following. Outside the walls of these establishments, same-sex dancing was illegal.  So clubs would blink the lights to signal that police were coming in for a raid. People would immediately switch to partners of the opposite sex.  Sometimes the police would line everyone up and ask for IDs and those without them would be arrested. Despite the ongoing harassment these clubs were crowded with lines to get in on weekends.

Nearby Napoleon’s was the gay men’s coat-and-tie establishment.  Other bars catered to LGBTQ college students, and still others to working class people. These bars were full of drag queens, people out for a good time, and those just curious to meet other similar people.

The highpoint of the Boston gay social season was the annual Beaux Arts Ball; it was the one night when the police let anything happen on the dance floor and people came from as far away as Chicago to be part of the fun.  Partygoers would spend months planning their costumes and. Costumes included Aladdin pulling a giant smoking lamp, Marie Antoinette with a headdress of live canaries, and a young man riding a turtle. 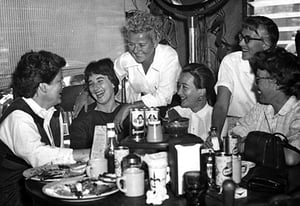 The mid-20th century say political and social movements in other parts of the country too.  Two nationwide rights groups were organized in California during the decade. In Los Angeles, the Mattachine Society reached out to gay men, while lesbians started the Daughters of Bilitis in San Francisco.  Both groups soon had active Boston chapters. These groups were timid by today’s standards but in the 1950s they were bold and courageous efforts because their members risked complete ruin by being openly gay and lesbian. They provided emotional support to their members and sought to change public attitudes through education and workshops.

Unfortunately the times were difficult.  Under pressure from social condemnation and the federal government, these groups disintegrated nationally.  But their Boston chapters lasted into the early 1960s. Many say that was because During these decades, Boston was home to Prescott Townsend, one of the most visible LGBTQ advocates in the country.  A scion of an old Yankee family Townsend led many of the local gay political groups in the ‘50s and ‘60s. Each legislative term, Townsend would go fearlessly to Beacon Hill to lobby the legislature to overturn the sodomy laws that were used to oppress gay people.

LGBTQ people were not passive victims during the 1950s. Despite government repression and strong social disapproval, they were resilient and built communities to assert their identities and help each other during these dark days.

The Punch Bowl club on Park Street in Boston in the 1950s. Found on markthomaskrone.wordpress.com