Who is Lucretia? The Personal is Political 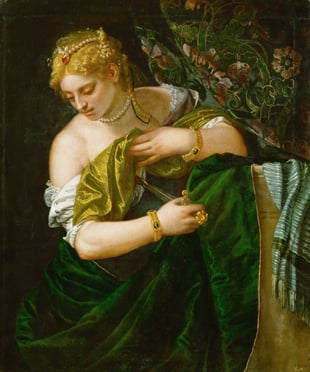 The story of Lucretia has fascinated and provoked much of Western civilization for more than 2,500 years, endlessly interpreted and reconsidered through philosophy, art, music, and drama. Yet, Lucretia herself remains elusive, her character explored in fragments by a variety of interpreters and the meaning of her tale more a measure of the current time’s morals and culture than it is a fixed dictum handed down from the ancients. She speaks little before the story’s central act of sexual assault and defines herself largely in terms of men—her husband and her father—yet her voice carries tremendous weight when she publicly names her assaulter. It is that strong, raw cry for justice that ultimately serves as the tipping point which incites a revolution against a corrupt dynasty. Lucretia is a creation of allegory, history and myth entwined, one that can help us understand on one level, the founding of the ancient Roman Republic; on another, the inherent tension between honor, patriarchy, and tyranny; and on still another, the nature of power itself.

So who is the character of Lucretia as shown through Britten and Duncan’s opera, separate from any possible historical reality? She is most often described, by others and by herself, as “chaste”—the word appears 17 times in the 40-page libretto, a near constant epithet. We first hear of her from the men of the story, encamped on the battle lines outside the city. Only Lucretia has passed the generals’ test of honor for their wives; while all else engaged in various acts of adultery when their husbands were absent, Lucretia remained true—burnishing the reputation of her husband, Collatinus. The power of her virtue and beauty enflames the jealous Junius, who declares, “Virtue in women is only a lack of opportunity,” and goads the aroused Prince Tarquinius into testing Lucretia’s virtue himself.

As Tarquinius furiously rides to Rome, the scene shifts to Lucretia for the first time. She is at home, thinking of Collatinus and spinning with her servants—the picture of domestic goodness. Lucretia seems secure in her position as a virtuous, high-status Roman woman, deeply attached to and in love with her absent husband. Her place in the social order is clear: wife and keeper of the home, patient and loyal. “Time treads upon the hands of women,” the Female Chorus sings. “Whatever happens, they must tidy it away. / Their fingers punctuate each day with infinite detail, / putting this here, that there, and washing all away.” There is scant evidence of guile or ulterior motive in the text; Lucretia seems to be as good as her reputation. 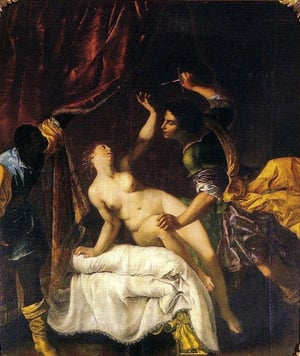 Lucretia’s true test comes later that evening, after Tarquinius has arrived to her bedroom and awakened her from a dream of her husband. Though she initially returns his kiss, from the moment that she is fully awake she rejects his advances, even reinforcing her self-understanding in a patriarchal terms by protesting that she could not give herself to Tarquinius even if she wanted to because she belongs fully and wholly to her husband. Both Lucretia’s public honor and her sense of core identity are on the line here. In the original Livy text as well as several other accounts through history, though omitted in the Britten/Duncan opera, Tarquinius makes a final threat: he warns her that if she refuses, he will kill her as well as a male servant (often depicted as a servant of another race, with brown skin—a double blow to Lucretia’s standing in that stratified social order), and arrange their bodies to suggest that they were having a sexual affair. It is this threat of the loss of her reputation and honor, not the threat of violence or the appeals to her own sexual appetite, that finally breaks Lucretia’s resolve, and Tarquinius rapes her.

This assault is horrific and compelling—but ultimately, at least to Livy and to classical historians, it is what comes next that matters most. Lucretia summons her husband and father, names the prince as her assaulter, and takes her own life. In some accounts, before she dies, she publicly calls upon her kinsmen to avenge her honor; in others, she demands they carry her body through the city to incite a revolt against Tarquinius and his family. In still others, such as the opera, she does not explicitly do either of those things; her suicide has the potential to be read as a more private, personal act of devastation and reclaiming her honor. In any case, her tragic death spurs the people to action, the monarchy is overthrown, the Roman Republic is born—and goodness triumphs, not just for Lucretia but also for the populace as a whole. 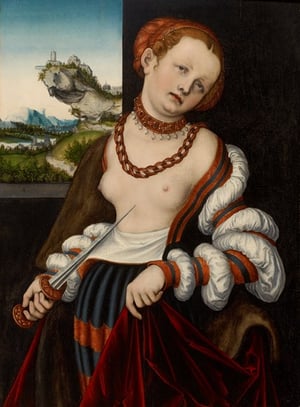 Yet, the story of Lucretia does not exist solely on a personal, private level. To borrow a phrase from social movements of the 1960s: the personal is political. The tale of her destruction and the ensuing regime change is an allegory of a corrupt, self-serving dynasty that, drunk on its own power, violates its own people and is torn down. It is a warning against the danger of tyranny and the tendency of absolute power to overreach, and a justification for the establishment of the republic. Stage Director for the new production, Sarna Lapine, sees Lucretia as the culmination of this, the pivot point, a woman whose decision to speak out against power led to a groundswell that toppled a monarchy and paved
the way for a participatory government, by and for the people.

For us, Ancient Rome is made immediate and tangible through the way a story is able to personalize a set of abstract systems and create archetypes that endure through time. There is a reason that we tend to forget the details of our history books, yet we remain endlessly fascinated by Lucretia—we learn best through metaphor, through fables that make the political personal (and vice versa). As have countless artists before us, it may be possible for us to hear echoes of Lucretia’s story all around us, from the conversations that we have in our own communities, to the public debates of national and world politics. Sexual violence, tyranny, corruption are all still with us; so are debates over power, control, consent, and autonomy. Now, as then, Lucretia’s body is the battlefield.

Images: Lucretia (detail) by Paolo Veronese (c. 1580-1583) Kunsthistorisches Museum. The Rape of Lucretia by Artemisia Gentileschi (c. 1645-1650); this painting includes the male servant, left side, whom Tarquinius uses as a threat. The Suicide of Lucretia by Lucas Cranach the Elder (c. 1529), Sarah Campbell Blaffer Foundation, Museum of Fine Art Houston.